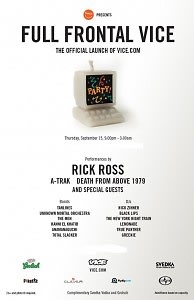 It's time to figure out where the parties are tonight. Make sure to check out our Calendar Page and follow us on Twitter as well!

Full Frontal Vice Launch Party When: 9pm - 3am Where: Skylight One Hanson, Invite Only Why: VICE.com is here and they've brought in Rick Ross to celebrate [Details]

Marc Jacobs SS12 After Party When: 9pm Where: Invite Only Why: The designer extraordinaire will celebrate his two collections this week. But he's not done, Jacobs will soon be heading to Paris for Louis Vuitton.

WIE Symposium Kick-off Event When: 7pm - 9pm Where: Invite Only Why: Glenda Bailey and Stephen I Sadove will host the kick-off for the WIE Symposium followed by AKRIS' F/W 2011 Show [Details]

Naeem Khan After Party When: 9pm - 2am Where: Invite Only Why: One of the last shows of NYFW, the Indian designer will also close out NYFW parties [Details]

New Yorkers for Children and CIRCA Cocktail Party When: 6pm-8pm Where: Lincoln Center. Invite Only Why: Celebrating the end of fashion week with designer Sophie Theallet [Details]

Cecil Beaton and the 1930's Pop Up Exhibition When: 6pm - 8pm Where: New York Design Center Why: NYDC will host a pop-up preview where pieces will be paired with couture from the Museum of the City of New York's collection [Details]

The King Collective Fashion Week Closing Party When: 10pm - 1am Where: Bar Basque, Invite Only Why: The fashion pr agency will close out nyfw with a party of their own [Details]

Richard Chai for Original Penguin Capsule Collection With Nylon Guys When: 6pm-8pm Where: Bloomingdale's Soho. Open Why: Preview the collab with music by Andy Rourke of The Smiths [Details]