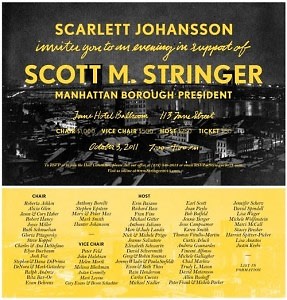 Scarlett Johansson Hosts an Evening in Support of Scott Stringer When: 7pm - 9pm Where: The Jane Ballroom. Ticketed Why: The night's proceeds will go towards the Manhattan Borough president's 2013 mayoral campaign. [Details]

Magnolia Pictures’ "Melancholia" Screening When: 6:30pm - 8:45pm Where: Alice Tully Hall. Invite Only Why: Kirsten Dunst and Alexander Skarsgard star in this film about marriage and the ....end of the world. The New York Film Festival screening will be followed by an after party. [Details]