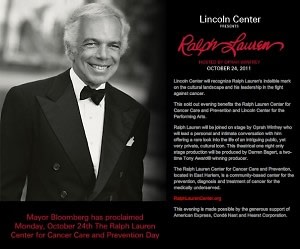 Salma Hayek To Attend Redbook's Exclusive Screening Of Puss In Boots When: 6pm-9pm Where: Hearst Tower. Invite Only Why: Salma celebrates her November Redbook cover and her new narrated animation film. [Details]

BlackBook Outside Insiders Party Presented By Grey Goose When: 8pm-11pm Where: MPD Restaurant. Invite Only Why: Snacks by Executive Chef Geoff Rudaw. [Details]

The Center For Hearing And Communication's 18th Annual Feast When: 6:30pm-9pm Where: Pier Sixty. Ticketed Why: Beacon, Becco, Butter, Ed's Chowder House, Felidia, Mercadito, Sip Sak and The Harrison are among other restaurants where you can walk around and taste the culinary delights. [Details]

Ice Theatre Of New York's 2011 Benefit Gala And Performance When: 7pm-11pm Where: Sky Rink and the Lighthouse. Ticketed Why: "Dare To Be Different" Benefit Gala honoring Johnny Weir. [Details]

The World Premiere of the Action-Comedy 'Tower Heist' When: 6:30pm-9pm Where: Ziegfeld Theater. Invite Only Why: Starring two great comedians, Eddie Murphy and Ben Stiller. [Details]

Montblanc & The Cast Of HBO’s “How To Make It In America” Select The Winner Of The 2011 Writers Project When: 6:30pm-9pm Where: National Arts Club. Invite Only Why: Lake Bell, Bryan Greenberg, and Victor Rasuk will read student plays and act alongside them. [Details]