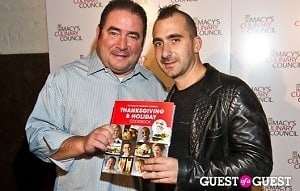 We took last night's event for the Macy's "Thanksgiving & Holiday Cookbook" as the chance to chat with celebrity chef Emeril Lagasse on whether he'll be attending the funeral of his "second mother" Ines De Costa (he's too busy and with chef Marc Forgione on his dad, twitter, and more.

I saw that the woman who taught you how to cook, your "second mother" Ines De Costa, passed away recently. Are you going to take time out of your busy schedule to go pay your respects? 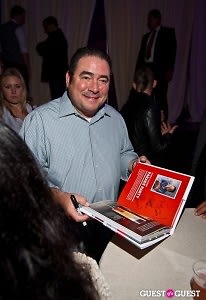 I'm sorry about that. Did you see on the Internet that there was a gag saying you directed a movie? It was on Eater.

Somebody sent out a fake press release saying that.

That I directed a movie? Wow.

It was a joke. They said you were co-starring with Cheryl Hines and it was called "A House Divided."

Wow. I didn't see that. I'll check it out though. Was it good?

It looked pretty funny. It said that you and Cheryl had a kid who got involved with a random act of violence and you two had to pick up the pieces from there. I don't get where food came in.

Are you going to make any of the recipes in the cookbook for Thanksgiving?

Oh, absolutely. The brunch recipes are fantastic. What a way to start off the day. I haven't really gotten into the other chef's recipes, but I'm sure they’ll be really good. 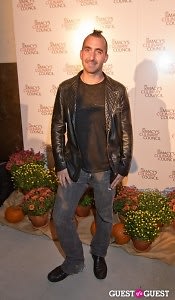 Do you think it’s a little early to start preparing for Thanksgiving?

I think once you get a jacket on [writer's note: Marc's wearing a bad-ass black leather one], it's time to think about it. As soon as the fall weather starts, and you start talking about squashes and brusselsprouts and all that kind of stuff, Thanksgiving always pops up.

Are you happy with all your recipes in the cookbook?

Yeah. It was very indicative of not just what we do at the restaurant, but what we do with my family. We’re a family of chefs, so sometimes it’s a little elevated.

Is there a tradition of one-upping each other at Thanksgiving?

I wouldn't say it's one-upping. There's a lot of second-guessing. The big thing in our family is, you'll be doing something and somebody'll walk by and kind of whisper, "Ooh, I don't know if I'd do it that way."

How about your dad, does he do that to you?

Yeah, like I said, we all do it to each other. But he's the "godfather," so we all kind of respect what he's doing.

Does he come here, or do you go to him?

Sad to say, especially since I've had my own restaurant, I'm working on Thanksgiving. So the last two years, they actually came to the restaurant. But growing up, it was always at my parent's house in Long Island.

What sort of gifts do you get for your dad for Christmas?

My dad's a tough one. He's not really into clothes, he's not into cars, he's not your typical guy's guys.

You'd get him a car for Christmas?

You know what I mean, little things for his car: keychains, etc. I'm trying to think what I got him last year. I think I bought him a nice carving set. What do you buy a chef? 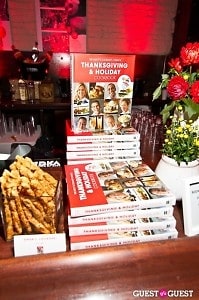 I saw you were looking for a new assistant. Have you found the right person?

It was. It wasn't planned to happen that way, it ended up turning into a conversation and it ended with something great.

Who did it end up being?

[calls over his associate] Hey Lonny, I can talk about the assistant, right? [Lonny says: No! Just kidding. Sure, why not.] Her name's Cassie. [interrupted by a good-looking cocktail waiter who offers him a New Orleans Muddled Ginger Cocktail dreamed up by Emeril. The waiter spells out the ingredients: vodka, little bit of cinnamon, soda, lime juice, and a ginger candy at the bottom.] You had me at vodka.

Yeah, I use it to let my followers see the new dishes. If I'm out doing something fun, I’ll tweet. But I’m not one of those guys that wakes up and starts tweeting. I actually didn't tweet about the assistant, it was a friend of mine, Ashley. We were just talking, and I didn't know she as going to do that. At first, I was a little concerned maybe, like, "How the hell did that happen?" But it ended up being very beneficial. And it worked. I got a great girl.

You said in a Times article that you'd "marry bacon." Is that the only love in your life right now?

Well, she didn't put her question there. The reporter [Sarah DiGregorio] had asked me, "Do I think that chicken skin could become the new bacon?" My response to that was, "If I could marry bacon, I would, because I love chicken skin, but it will never replace bacon."

Have you had to kick anyone out of the restaurant since that infamous incident where you booted a Times writer from your restaurant?

That was the only one that's done that.

Have you seen him at all? Has he come back?

No. We're not friends. 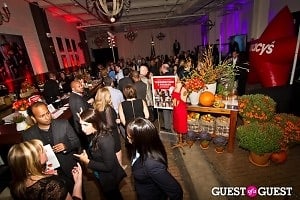 Are you still going to try to open a Southeast Asian restaurant? The community board put the kibosh on Kyo’s 265 Elizabeth Street location in May.

We're working on it. I'm going to help back it and help inspire it, but it's more my friend, his name is Suephet Schweda [writer's note: checked with Team Forgione on the spelling of this name, it's Laotian]. It's his concept, his restaurant, and he's a very talented cook. I'm going to everything I can to get it done.

Do you think you'll stick with Soho for that?

It depends. New York is funny. Sometimes you find a diamond in the rough, sometimes something in the West Village, you never know.

Why did you pick Tribeca for your restaurant?

I love the neighborhood. It’s quiet, it’s classy, is the best way to describe. It’s a great neighborhood to have a restaurant, at least for me.

Do you get a lot of big names coming in?

I mean, we get some celebrities in there. But we treat everyone the same at Marc Forgione.

What? I think that shows a lot of what’s wrong with Wikipedia. [laughs] He should have a page, and it should be a lot longer than mine. It doesn’t make any sense. Without him, myself and a lot of other chefs wouldn’t be where we are today.

What do you think about Sandra Lee and Rachael Ray, chefs who try to make their food more accessible to the public?

I think anybody that can get people to cook, whether it’s Semi-Homemade or in 30 minutes, I tell people all the time: If you like to eat, you should know how to cook.

A lot of people are very critical of Sandra Lee, especially on the internet.

I’m a very “to each his own” type person. As long as you’re not bothering me, we’re all good.

Do you think you’ll return to reality TV anytime soon, outside of Iron Chef?

You gotta ask the Food Network! Follow Evan on Twitter at @EMulvz and send him tips at d.evan.mulvihill@gmail.com.