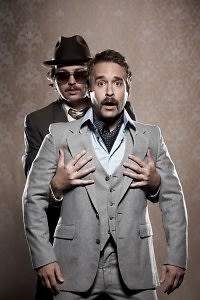 I just interviewed two of the coolest guys you could possible hope to meet. DJ's Graham Funke and StoneRokk – two DJ's who became friends and have owned the music/party/club scene ever since. The boys are based out of LA but do events in New York and Las Vegas among others and StoneRokk AKA Michael Stone was born and raised in Queens. They have worked for Brad Pitt, George Clooney, Christina Aguilera and have a close friend in DJ AM. There are too many accomplishments to list, so let's introduce you to Graham Funke and StoneRokk…

What made you decide to work together? StoneRokk: Graham and I used to run parallel to one another in LA…we had a ton of mutual friends and met through one of them (who we no longer speak to) and realized we had the same eccentric tastes. Our theories in DJing were the same so we branded ourselves as a team. A lot of bad DJ's are out there and we wanted to do something about it. I'm not the best, but I'm pretty f***ing good. If you've never carried a record bag in your life, you don't know what real DJing is.

Graham Funke: DJing has become so accessible. Most DJ's out there don't have the true skill set or motivation to do it. The business used to be the enjoyment of playing records and there weren't machines to do it all for you. It was so much less glamorous - no females, no money, but if you were lucky you might get free drinks. You did it because you loved it.

Tell me about growing up in Queen. SR: My mom was fresh off boat from Italy and my dad was from NY – 2nd generation Italian. I was stuck in the house doing various mom enforced activites…tennis, fencing and art classes…my mom didn't want me roaming the streets of New York. She finally bought me a skateboard one day and I knew I was meant to be on the streets checking everything out.

Where could we see you in New York? GF: I played Mansion a few weeks ago…Marquee before that and I did a bunch of Hamptons events last summer.

Favorite spot in NYC? SR: Joe's Pizza in New York …the actual pizza place. The original Joe's. The best pizza on Earth. When I touch down in New York I think all my problems disappear. I hate LA. It's all fake and I don't identify so just being in NYC makes me happy.

Massive club or small lounge? GF: I enjoy a smaller room – you can get away with more stuff. Intimate lounges breed creativity. The bigger room is impossible to experiment in and hook 2000 people on a new combination.

What new songs are you into? GF: Miami Bitch by LMFAO and Hold on by Holy Ghost.

SR: My always guilty pleasure, because new music sucks, is the Oh Brother Where Art Thou soundtrack on vinyl.

Is there a celebrity who you love working with more than others? GF: The times I've done parties for Christina Aguilera and her husband, Jordan Bratman – those events are normally high stress, but Christina and Jordan LOVE early 90's East Coast rap music. I love it too and they just say, "do that." So easy! They are an enlightened couple.

What do you like to wear while you work a party or club? GF: It's often fashion over function many times. At Tao Beach in Las Vegas I wear short shorts but I usually have a vintage button down shirt. I have lots of Yves Saint Lauren vintage shirts. I open the buttons for easy reaching and go to work.

SR: Graham used to really love wearing a captain's hat at Nacional while playing rad rap music. He also wore an anchor earring. He really loved the nautical garb back in those days. I keep it simple, 'cause I'll be sweaty.