Celebrating the release of Love Rehab: A Novel in Twelve Steps, 10 eligible bachelors were auctioned as dates last night in the Jazz Room at The General. The event lasted from 8 pm to 11 pm as attendees eagerly bid on a group of great guys (some 'sold' for more than $300!), with proceeds benefiting She's the First. Check out our interview with the Love Rehab author, Jo Piazza, below!

"My novel is really about empowering women, so I knew that I wanted to do something to make women feel awesome at my book party," Love Rehab Author Jo Piazza, told Guest of A Guest. "Frankly, what is more empowering than purchasing your very own man?"

[Photo: Jo Piazza via Guest of a Guest]

The book - available on Amazon, iTunes and at Barnes & Noble - is about a woman named Sophie who is undergoing an awful break up and not taking it well.

"She is Facebook stalking, sending drunken text messages and just behaving badly," Ms. Piazza said. "After her best friend drags her to a court-ordered Alcoholics Anonymous meeting, something clicks in Sophie's brain. She realizes if she starts a Love Addicts Anonymous group for women, then they might just have a chance at healing their collective crazy."

Ultimately, Sophie and her best friend Annie recruit (and are refereed) new comrades, as they reflect on their relationship/drinking flaws. Together, the group of single ladies persevere, but not without obstacles and laughs. 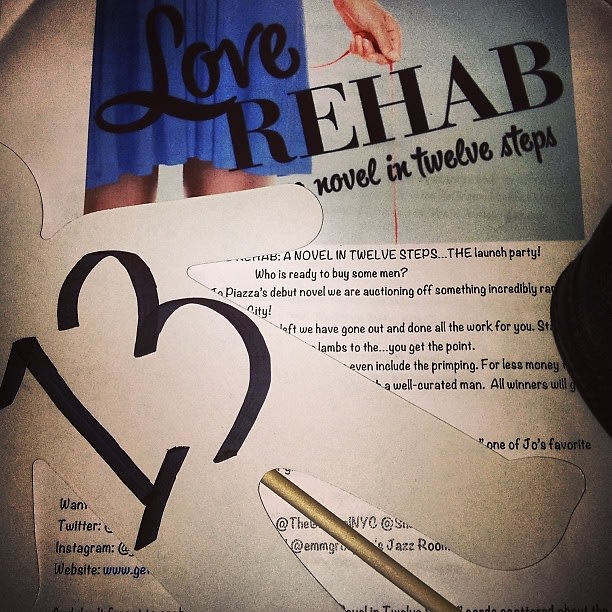 [Photo via Guest of a Guest]

The stories cited in Love Rehab, of course, are based on real occurrences - and not necessarily pretty ones.

"Someone I know did indeed put their ex-boyfriend's penis on Facebook after they broke up, but I am not going to name names," Ms. Piazza said. "I personally once cut my own bangs for no good reason, but I blame a bottle of tequila and watching Sweet Home Alabama while intoxicated."

Ms. Piazza - who recommends singer Rihanna attend Love Addicts Anonymous - is an incredibly witty writer; sharing relationship stories (that most can relate to) and her sense of humor throughout the book.

"I just want women to laugh," she told Guest of A Guest. "This isn't Hemingway, but it is a lovely read for sitting on a beach, drinking a glass of wine."