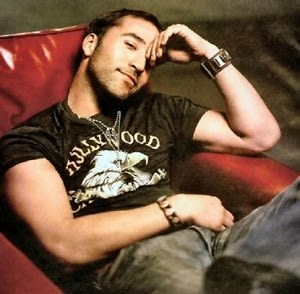 What was I doing curled up on the floor in the back of the Boom Boom Room, frantically scribbling on the back of a receipt last night? I got a surprise chance to interview Entourage star Jeremy Piven over the phone and this was when he called, of course! Piven, who plays neurotic movie agent Ari Gold, tells us about the end of of his long running TV show and what's coming up in his career. Entourage is embarking on it's eighth and final season, and though there are plans to make it into a movie at some point, that's not anywhere in the immediate future. So what is up for him next?

I have a few movies coming out that I’m really proud of. They’re all very different genres, but they’re exciting to work on. Right now its Spy Kids 4D, which is essentially a kids’ movie, but I’m working with Jessica Alba, Joel McHale, and Ricky Gervais, which is great.

So how is working on television different than working in the movies?

Working on Entourage is like shooting a movie. You’re still in the studio shooting; it’s just broadcast on television instead. It all feels like one big movie to me.

Pinven's parents were both actors, and they founded the Piven Theatre Workshop, of which Jeremy is an alum. How have your parents influenced you in your career?

The first time I was on stage with my mom, I was eight years old. She greatly influenced me just from watching her perform. She had such strength and clarity. She was also my acting coach. Just spending time with my father at the Piven Theater was a big influence on my career as well.

Who would you say is your favorite actor?

There are so many amazing actors it’s difficult to choose. I would have to say Martin Landau. I’ve always thought it was kind of magical, what he does.

Piven says he isn't sad about the end of Entourage, but he's thankful it happened, and proud of what transpired.