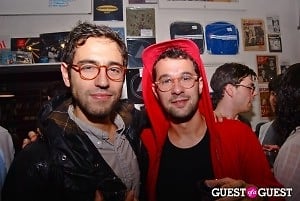 David Shapiro, tumblr wunderkid and creator of the wildly popular Pitchfork Reviews Reviews, recently chatted with us about his new venture -"The World's First Perfect Zine." Known around these parts as "the Blackberry Blogger," Shapiro is a former GofG contributor and is now making a name for himself (or pseudonym, as he claims) on more than just tumblr. The reviews reviewer just launched a new magazine humbly titled, "The World's First Perfect Zine."

With contributions from the likes of Jenna Wortham of The New York Times, Victor Vazquez of Das Racist and novelist Tao Lin, to name a few, the "perfect" zine has promise. I talked with David about his current favorite albums, those super hush-hush filmmaking plans, and how he was once serenaded by Tom Wolfe - all via BlackBerry, of course.

How did you come up with an idea like pitchforkreviewsreviews?

I'd been reading Pitchfork every day since I was fourteen and the site has no comments section, so this well of commentary and opinions on Pitchfork had been building up in my consciousness for so long, and I was too embarrassed about reading Pitchfork every day to talk about it with other people and let it out that way, and then I guess one day I just decided to own it -- I came out as an obsessive Pitchfork reader and started writing about it.

Has the actual Pitchfork ever approached you about your blog? Was it favorable?

I have relationships with a few people who work at Pitchfork and they're mostly favorable. Obviously, you know, if there was some random kid with a bone to pick with your site scrutinizing almost every word you published every day, you might have a weird relationship with him, but beyond that I think people at Pitchfork recognize that we're, ummmm, not so different.

When you wrote for us at Guest of a Guest, you were known as the Blackberry Blogger, covering parties in stream of consciousness. Has say your writing changed since then or as they say, if ain't broke don't fix it?

I still write how I think and speak, probably partially because I have no training as a writer and it's the only way I know how to write, so yeah, I still do it. I'm writing this on a BlackBerry 8700g right now. 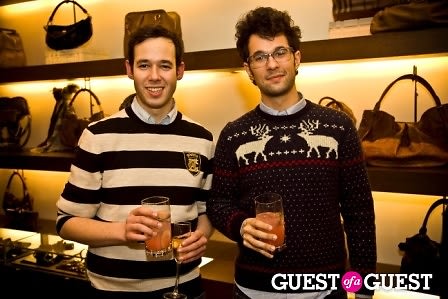 [A cocktail and a Blackberry, David Shapiro on right.]

Speaking of parties, what is the most ridiculous situation you have found yourself in? Aside from meeting that heroin dealer from Craigslist.

One time I asked Tom Wolfe if he was into pop music (my thinking on the question was that old people divide music into popular and classical) and we were in Cipriani, and he started singing to me, and I wrote down the lyrics and later learned he was singing a Paramore song. That was pretty wacky.

Although you usually review reviews, what are some current albums you would give at least a 7.2?

Drake's Take Care, the debut OFF! album, and Das Racist's Relax, and every jj album from now until the end of their career.

Can you tell us a little about your new venture, "The World's Perfect Zine"?

It's a collection of writing and art from musicians and writers and a filmmaker, all of whom I really admire. It's printed in a run of 500 copies and came out yesterday. It's perfect.

Aside from your zine, do you have anything else in the works?

I have some secret stuff that I'm barred from discussing publicly, which is maybe the worst way to answer this question, but maybe another zine? I haven't figured out if I'll do another.

Your blog speaks of a possible film. Could you tell us a little more about that?

It shoots in New York in the spring. Beyond that, I'm not really allowed to discuss the people involved in making it. I'm actually only allowed on set one day (or two, with permission from the director and producer) because when the writer is on set, they generally fight with the director and say stuff like, "But this isn't how I envisioned it!"

As a reviewer of reviews, some scathing, some not, are you worried about people finding the world's first perfect zine somewhat short of perfect?

The World's First Perfect Zine is a tongue in cheek title and a reference to a band I really like -- The Hives' most recent album was supposed to be called The World's First Perfect Album, which was the best album title I'd ever heard, but then they scrapped that and called it The Black and White album which struck me as being a markedly shittier title. Secretly, the zine's not actually perfect: I saw a typo.

Would you ever switch to an iPhone?

No way! So hard to type on. I do almost all my writing on my phone and I can't use that crazy keyboard.

[Go HERE to see more photos from 'The World's First Perfect Zine' launch and HERE to see our post!]