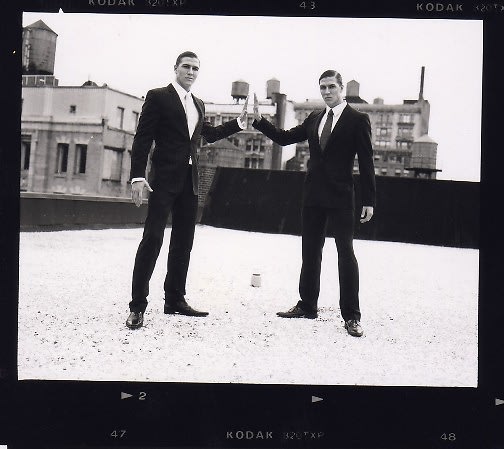 Derek and Daniel Koch are the kind of hard-working boys from the midwest that we just LOVE to have as our neighbors here in New York. From "cornfields to skyscrapers" these identical twins are just beginning to leave their mark on this town. Spending years working under Phillipe at the popular Upper East side European hangout "Le Bilboquet", they were ready to start something of their very own. This November they took over the old Frederick's uptown location on 58th street and openend "Jour et Nuit" (JEN). French for "Day and Night", this bistro turns into a bar around 11:00. The duo also just started their investment company "Seo Koch Investment Group (SKI Group)" which focuses on real estate, clubs, restaurants and new buisness developments among other things, AND just finished their very own movie called "A Pair of Hearts". Quite the progression from the lemonade stands they used to operate as kids....it seems that there's no end in sight for this attractive pair.

You and your twin brother are originally from Ohio. What was it like first coming to New York? Derek: Well, you know Martins Ferry and New York City are almost identical, so it was a very easy transition. Daniel: Yes, it was like we never even moved. You know, corn fields and skyscrapers go hand in hand. It was a tough transition at first, but we love challenges, and we figured, if we can make it in New York, we- Derek: You know, we make it in New York.

Why did you come? Derek: We first came to New York because we were discovered by Oscar Reyes at Trump Management. Daniel: Everything came so quickly, it was a very exciting time for us. Modeling, runway, beautiful women, fashion, the nightlife.

Were there aspects of being from the Midwest that helped or hurt you? Derek: I think it only helped us. People from the Midwest, I think, are more grounded. Daniel: Yes, we have strong beliefs and strong family values. Derek: We may have come to New York City a little naïve, but we came with a clean slate, with only great intentions and a very strong work ethic. Daniel: I think, perhaps, our innocence is part of our charm.

Before Jour et Nuit, you guys worked at Le Bilboquet. That must have been quite an experience. Tell us a little bit about it. Derek: It was an incredible experience for us. This is where we really learned everything there is to know about running a restaurant. We really respect Philippe and what he has done with his restaurant. We owe him a tremendous amount of gratitude for what he has taught us. Daniel: We were able to use this experience as somewhat of a model for what we are trying to do at Jour et Nuit. We want our customers to have a total "experience" when they come to our restaurant, not just a great meal; a dining experience; which can lead to an invitation for JEN Bar in the back; which opens a little later in the evening; usually around 11. Derek: That's when the fun really begins. 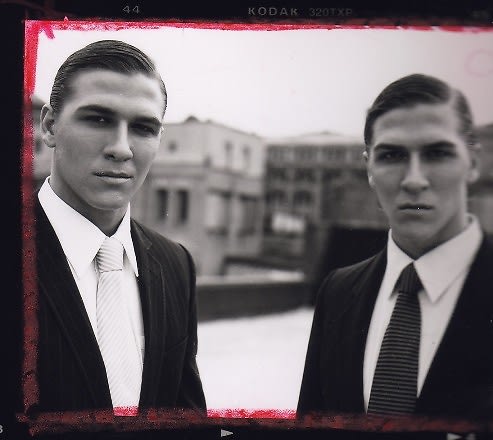 Jour et Nuit is your first gig as a managing partner, how is it running your own place? Derek: It's a little different than running a lemonade stand when we were 5. Daniel: Yes, we can now add alcohol to our lemonade. Derek: It's been a humbling experience. I think I've aged 10 years since I became involved in this project. I've been working nonstop every day since August. I was involved in every aspect of this project since its inception. Daniel: Honestly, it's been a lot of work, but it's been fun at the same time. We do have a lot more responsibilities than we did at Bilbo, but it's been worth it. We have done a lot of growing up in the last few months. Derek: Yes, as partners, we can't run around the restaurant with our shirts off. Daniel: Yes, we can only do that in the back bar (JEN bar), later in the evening.

Tell us a bit about JEN, who designed it, and what's the crowd generally like? Derek: Blake Seo, who is kind of our mentor who we have known for years, who has owned a few clubs himself, is our lead designer; although, we all had our input in the whole design process. He has a very keen sense of bringing everything together, the look, the feel, and the vibe. Daniel: We were very fortunate to have Blake come to New York to help us guide and mold our place into what it is today. We call him the black ninja, although, he is not black. Derek: Not that there is anything wrong with that! Derek: The crowd, I think, is the best in the city. We have a great mix of people that come to our place. Daniel: It's a very diverse, beautiful crowd, with almost zero pretense. Derek: Yes, we have almost an equal ratio of short and tall people!

Your favorite thing on the menu? Derek: The Salmon Tartar and the Fois Gras are one of my favorites. The Veal Hanger Steak is amazing. Daniel: My favorite is the Tuna Tartar and the Braised Short Ribs. But, honestly, you can't lose whatever you order, everything is good. Derek: Yes, and we're not just saying that because we own the place.

You also have a background in film, studying at NYU. What are your plans in this area, what projects you are currently working on? Derek: Well, we just recently finished our movie, which is inspired by a true story, which we wrote, directed, produced, and starred in, called A Pair of Hearts. Daniel: We are working on a number of projects including writing a couple of new screenplays, which we would love to make into a film; uh hmm, anyone? Beuler? Derek: Beuler? Daniel: We also just formed our company, the Seo Koch Investment Group (SKI Group), which we intend to bring the same sort of unbridled enthusiasm to every project we do; which will include real estate, clubs, restaurants, new business development, along with many other types of investments, which we are not inclined to discuss just yet. Derek: You'll just have to wait and see. It's going to be HUGE!

All I want for Christmas is... Derek: My two front teeth. My restaurant to do well. Christmas came early for me; I got everything I wanted this year. Daniel: A hottie dressed like Santa's helper.

Top 5 songs in your ipod? Derek: Don't have one. That's what I want for Christmas! Daniel: Dash Berlin, Till the sky falls down Shiny Toy Guns, Starts With One Tiesto, Carpe Noctrum Lighthouse, Everything Killers, Read my mind

Photos below of Jour et Nuit: