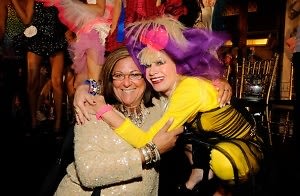 [Fern Mallis with Betsey Johnson at her fall '09 show. Getty] There are a lot of ladies who attend a lot of the shows. But there is one lady who attends ALL of the shows, sits in the front row every time and you will oddly never see her not looking fresh. Yet she probably sleeps a lot less than anyone during fashion week. It’s not because she’s partying; it’s because she’s working – actually, she IS Fashion Week. Do you know who I’m talking about? Fern Mallis, SVP of IMG, who the main reason why the Mercedes-Benz Fashion Week exists in New York. More...

In 1993 Fern started 7th on 6th under the CFDA to organize the shows and create some consistency so that American Designers could properly compete in the global fashion market. Eventually it was bought out by IMG in 2001 and they now produce Mercedes-Benz Fashion Week in New York and Miami Swim. That’s a little history for you as far as Fashion Week goes and Fern Mallis behind it all. So if you feel tired, run down, over worked and downright fashionable at the same time, you can thank Fern for that. She is the ringleader of quite possibly the biggest circus in town that comes but only twice a year (thank God). I caught up with her at the Tents in Bryant Park to talk about some FW survival skills and trends she’s not down with.

DM: It’s Fashion Week for the Spring/Summer 2010 season. What’s a trend you are seeing so far that you are loving?

FM: I’m seeing lots of fun dresses in pretty colors. Also prints are a big trend. It feels like it’s going to be a print pretty season next season.

DM: If there’s one trend from the past that you could bring back, what would it be? What does Fern like?

FM: I don’t know that there is any trend that I would want to bring back. If it’s a trend I don’t want to bring it back. I’d rather see things moving forward.

DM: Okay, what’s one trend you don’t EVER want to see again? Something that you look back on and think ‘oh gosh I wore it and I thought it was great but looking back I would never do that again’?

FM: Well, I’ve never been a huge corset fan. I think there was a time when there were too many corsets. I’m also really anti all these platform monstrosity shoes. I think they are not only ridicules but they are dangerous.

DM: Yeah, like how many people are going to chiropractors as a result of habitual 7 in heel wearing?

FM: I’m hardly staying fresh but I’m trying. I’m lucky if I get 4 hours of sleep lately. I’m drinking lots of One Water (she got her plug in for FW tent sponsor) and lots of coffee.

DM: So you are a coffee drinker, not a tea drinker.

FM: Well, I’m trying to wean myself but the coffee gets me through.