After last night's Broadway premiere of Driving Miss Daisy, we caught up with James Earl Jones outside the Plaza as he headed to the after party. Despite his role as chauffeur Hoke Colburn, Jones confessed he has issues behind the wheel and gave the dirt on his iconic Darth Vader voice. 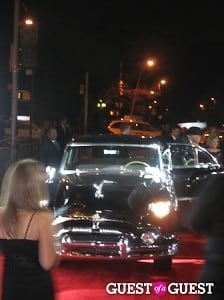 Jones--who was driven to the after-party with his wife, Cecilia Hart, in a vintage Packard (with license plate SK82S6)--adjusted his bowler hat as he confessed how he ironically landed this gig.

"The way I got this role was I met the producer at this little restaurant in the Village, and I was taking Ceci to it, and I was trying to parallel park. The third try he walks up, he says, 'You don't get the job.' It's a true story. He was lying, though, cause I did get the job."

Jones, who drives a Jeep because

"we live in the snow country in upstate New York...if you don't drive a Jeep, you're gonna get snowed in for weeks at a time,"

doesn't have to worry too much about his own driving prowess (or lack thereof), because he has a skilled chauffeur: 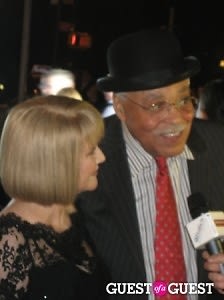 "we've known him for years. He also has secret service training. When the President's in town, we don't see him. That sort of thing. But he's excellent at defensive driving. If there's trouble ahead of him, he's very busy getting out of the trouble and resolving it, rather than cussing someone, or yelling, or banging his horn."

He found some humor in being driven to and from the theater for this particular role, but admitted it's not always the case, even when you're James Earl Jones.

"I'm lucky enough I have a producer who can make that possible. It's very handy, but you have to go out and wrestle for a taxi cab every now and again."

Then because Jones's voice--which belies the teddy bear gentle vibe the man exudes--was so booming during his responses, we had to ask about how he cultivated such a bass--that famed Field of Dreams intonation.

You have the most iconic voice in America, we told him.

"I hear my voice through my cranium. That's a different voice than you hear. I have no idea what you're talking about." 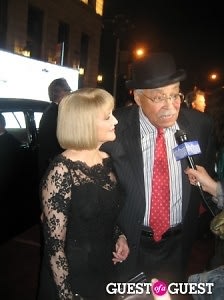 He turned to a serious tone and told us that his voice actually derived as a compensatory mechanism for the trouble he had early on with articulation and oral delivery.

"I'm a stutterer, and I stuttered when I was five years old and didn't talk until I was fourteen. When I started talking again, I discovered I had a male voice that is an adult male voice. That's all I know."

He practiced oration in school as he cultivated a passion for the dramatic arts:

"I had to, I had to to learn how to talk in Michigan."

But he admits he still has trouble with verbal argumentation:

Then Jones's wife leaned in and clued us into the facade of his profound oratory style. :

The two the walked briskly into the Plaza, past a line of parked Packards, to join the revelry. Later that night in an unrelated happening, Charlie Sheen was found naked and intoxicated in the hotel. Take that, people who say the Plaza has lost its stuff.