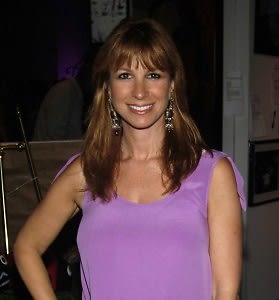 Jill Zarin is not your typical "housewife" of NYC. Although she is one of the main cast members on Real Housewives of NYC, she's first and foremost a mother, daughter, wife, friend and a successful businesswoman.

I love her tactful honesty. Our interview followed the Republican National Convention, which we had both watched on TV the night before, and naturally turned toward the subject of politics:"The whole situation is painful to watch and there are pros and cons to both sides. I think McCain blew it with his VP choice. He's made my choice easy for me." I agreed, but we moved the conversation along, and from the sidelines of the US Open, Jill gave me the scoop on life as a Real Housewife of NYC, the second season, what we don't see on TV and fashion.

Have you experienced any changes that have occurred in your life from the success of Real Housewives of NYC? Absolutely, people are very friendly and doors have opened; not that they were closed before. I've met so many new people. Just today, I'm at the US Open and was recognized. Someone came to introduce themselves because they recognized my voice. I have a very unique voice.

Why did you decide to do the show? One of reasons I did the show was to promote my business, Zarin Fabrics. We get even more customers from all over the world now. It’s been fantastic. Our company is great and we needed to get word out there and it’s worked.

How are the relationships on the show at this moment? They’re tense. Some are angry. It’s like any friendship; you’re going to have good days and bad days.

Even if you run into someone, you kiss and hug her, but you have to be like that in civilized society. You really can’t say what you’re thinking. That’s where Ramona [Singer] has problems; she has to apologize when she puts her foot in her mouth.

In civilized society, you have to keep your mouth shut sometimes. I’m not going to say to you what I’m thinking always. Even if some people think we should, you can’t do that. But, in reality TV, you get to see what we really think afterwards. That’s why the show is so successful. At the end of the day, we know what we did and we’ll all stand together, but we do really say what we think. Sometimes we make mistakes but we try to do our best and I think that’s why sometimes our cast members forget the cameras are there and you’ll catch them saying things they shouldn’t. You couldn’t write the script, it’s so good.

What should we expect in Season 2? Any good scoop? I can’t give anything away but I can tell you there’s going to be a lot of fireworks. You won’t be able to stop watching. It’s going to being addictive and riveting. You couldn't write a script for what you're going to see. In my opinion, each of us [cast members] is someone you knew in high school and it's up to the viewer to decide who is who. There's the popular girl, cheerleader type; the girl who is in a clique but isn't in the most "popular" clique and wants to be; the transfer student; the insecure girl who wants everyone to like her; the social climber; and the girl who doesn't care about any clique and just wants to look back and say she made it. The show feels like it's grown-up Mean Girls sometimes!

A big part for me on Season 2 is the renovation of my apartment. It’s like a bomb shelter right now! I can’t breathe - there’s so much dust! My apartment was traditional before and I completely got rid of everything. It’s going to be more modern. I’m using a lot of blues, silvers and whites, so it’s really lightened it up. I think every seven years people need a renovation but my husband doesn’t believe in it. He asks me, “Why are you throwing money at this?” But at the end of the day, he’s okay with it. Bobby is the best.

What do we not get to see on tv about you and who you are? What you see on TV is pretty accurate. I’m a mom and wife first and I work. I do a lot of charity work. I try to give back and I teach that to my daughter. I believe charity starts at home. Allyson has school, but I still make sure that she participates in charity as much as possible. Recently, we, along with the cast members, went to Hope Lodge, which was started by the American Cancer Association. We went to cook for the residents.

I’m always trying to give because before you receive, you have to give. I’m not a Kabbalist, but I live life according to their principle of giving. They say if you do good things, then a miracle will happen. In my mind, a miracle could be simply thinking of someone you haven’t seen in 5 years and I’ll run into them on the street.

Can you tell us about the juvenile arthritis foundation you are a part of with your daughter Allyson? The foundation is called "Creaky Joints" and it's a charity for adolescents with arthritis. Both Allyson and my stepson Jonathan have arthritis and they're highly involved with helping the cause. We're having a fundraiser on October 21 at Hudson Terrace. The season finale for Season 2 of Real Housewives will actually be filmed at the event and tickets are available to anyone. All of the money raised will be donated to Creaky Joints.

What is your latest food craze? I found this amazing chocolate that helps lower anxiety, pain and cholesterol. It has a high level of antioxidants and helps you stay healthy! You can find out more about it at http://jillzarinchocolate.com. People who get addicted to it, like I have, can sell it to their friends.

I understand you have an advice column in Life and Style section of Hamptons.com! It probably comes naturally for you, would you say it’s part of your personality? What’s the most interesting/funny question you’ve been asked?

Nicole Brewer from Hamptons.com called and asked me after the first season of the show. She said, “You know what, Jill, you should have a column."

I found I wasn’t getting as many questions as I was in the beginning, so I voluntarily cut it back to every other week and when the show comes back, I’ll go back to every week. I get about ten questions a week.

The best Hamptons questions I got was this woman who emailed me looking for love. I wrote about it and it included a bit about herself and a guy read it and responded that he wanted to meet her. She wanted to make sure he was legitimate and he checked out so they met. Their first date, they went to Golden Pear on Main St. in Southampton for coffee and that went well; then he invited her to his house for dinner on the second date and it busted. I think she said he was sloppy, but you never know why. People are single for a reason sometimes.

What would you say is your favorite thing about New York? My favorite part is the four seasons. I love changing clothes; I love that the coolness is coming and then I get to wear sweaters and jackets, and before I know it, it’s spring, I take off the layers and then it’s summer! I’m ready for black leggings and boots. I think we’re very lucky. I love the change of seasons. I love all the events that remind you of what time of year it is.

There were tons of shows I wanted to see, but some of them don't work out with my schedule unfortunately. I also wasn't around for most of it because my mother was sick in the hospital so I went to see her in Florida. I did attend Zang Toi, Helen Yormak (we filmed the show), and Angel Sanchez's presentation. I actually didn't mind missing the chaos of fashion week, especially because I didn't have to dress up! Now it's more of a production when I go because we're filming. There were already five other housewives running around the tents like crazy people. I took a step back.

Who are your favorite designers? I love Zang Toi. His clothes are beautifully handmade and he dresses high society. He had a charity event for his fashion show at Danielle's. It was very classy and high-end. It was great! I enjoy more intimate settings.

I also really like designers such as Alice and Olivia, Mark Bauer, Theory and Herve Leger. I actually wore a Herve Leger dress last night and got a lot of compliments. I could never wear Herve until about a month ago...and three curdles later...

Chanel and Gucci have great bags for the fall season, and YSL's are fantastic as well as their belts. For shoes, I used to like Christian Louboutins, but I recently switched to Giuseppe Zanotti - I think they're more fashionable. When it comes to fashion, I'm not fickle but i'm flexible.

Do you have any fashion advice for our readers? Every year is different; you never know what colors they’re going to do; everything is in and everything is out. Let’s say orange is out but if a different designer doesn’t think so, it doesn’t mean it’s not cool. There are no rules. Black is always the best, but other than that, anything goes.

I believe in tailoring your clothes; designers make clothes of one style and it’s supposed to fit 30 different body types and customers need to know that you’re supposed to get your clothes altered to fit.

Bras need to be worn if you’re over a certain age and a certain cup size. Some women over 35, they need to wear a bra to pick it up. I have a pet peeve that women should wear undergarments. A 35-40 year old should wear a bra! I talked about it on the show. I love spanx. I couldn’t wear half my clothes without spanx. It evens you out - it’s great stuff.

Have you been out post-fashion week? What are some of the highlights? I went to US Weekly's party last Friday at Hudson Terrace. I ran into and talked with Kelly Ripa, John Legend, Elizabeth Hasselbeck and Dale King. Kelly is a fan of the show and she's a great mother, not to mention, so pretty, sweet and elegant. She always says hi to her fans. Last night, my husband and I got a skybox for the Celine Dion concert and we invited 16 of our friends to join us. We had dinner and drinks - it was really special. After the concert, we went backstage and met Celine, who is great and lovely.

Jill Zarin is making her mark as the outspoken connector on Real Housewives of NYC. She admits that she is opinionated and "calls it the way she sees it," but adds that it doesn't mean she's always right. However, what we don't necessarily see on TV is the Jill Zarin who is gracious, altruistic and giving. She is adamant about many things, but of them all, she emphasizes that she always lives life trying to do what's right. It doesn't mean the result will always be favorable or "right," but it doesn't hurt to to do the best we can. Jill has many philosophies, but she emphasizes the old-fashioned saying, "Do onto others as you would wish them do onto you."

Season 2 of the show is set to air in early 2009 and we can't wait. Get ready to be glued to the screen as the plot thickens and unfolds the drama and real life complexities that revolve around each "housewife."