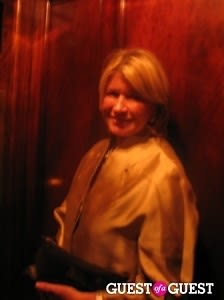 Talk about serendipity. As you may know from past scribblings, I attended The Martha Stewart Show on Monday with my girlfriend and won a gelato maker. So imagine my excitement when I bumped into Martha Stewart herself at The Waldorf Astoria last night...

There I was, slinking out of the elevator sulkily after Martha seemed a no-show for the Annual Global Leadership Dinner celebrating the alliance of the United Nations Foundation and U.N. Association of the U.S.A. I had eavesdropped in on a Ted Turner argument and chatted with John Kerry, but I was a smidge miffed that the mega maven herself hadn't walked the red carpet. I rode the elevator down from the 18th floor with similarly bummed photographers.

But then, as I went to zip through the lobby, an effulgent glare caught my eyes. There was Martha , dressed in shimmering gold. I asked her if I could ride the elevator with her and ask her "a coupla question." She curtly obliged.

Usually I find interviewees tend toward the glib when you start out with a softball question pertaining to the event at hand before getting to the personal, financial, or political.

I asked, as such, how she was connected to the U.N. dinner.

"I don't have any involvement," she said.

She was slightly awkward when speaking, because there were three other strangers in the elevator, and if you're a name, you don't want conversational mishaps to become maligning anecdotal fodder.

A woman with a southern accent said to Martha, "pretty dress." Martha smiled.

I raised my GofG G-9 camera to snap a photo.

"I didn't say you could take a picture," Martha said.

"But you look beautiful in this gold," I said. What an idiotic statement to make.

"I just have one request," the  woman with the southern accent said.. "We can't get you in Greenville, South Carolina any more."

"You don't have Hallmark?" Martha inquired all nice-like.

"We don't have Hallmark," the woman said.

"OH MY GOODNESS," Martha said."It will come back."

The elevator stopped at the 12th floor, and the door opened.

"Oh, you're getting out?" Martha said with a hint of regret.

"It would be nice if I could just snap..." I implored.

Martha put her hands out in acquiescence and posed.The elevator beeped a few more floors and opened at the 18th.

"What is a big Thanksgiving debacle to avoid," I asked as we exited. That was a jerky question to ask, I think in retrospect. I really wanted to ask her which equities I should trade on.

"Oh, I don't want to think about Thanksgiving," she said as she walked toward the party. "Sorry."

I suppose I too wouldn't want to talk about the holiday either if I had to baste turkeys and cook pumpkin pie every morning. And so I slunk back into the elevator and took it back down to the lobby.