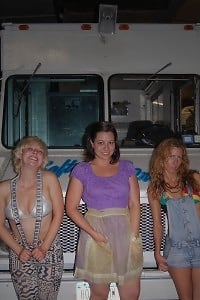 [Punky B, Miss Softie, and FluterScooter. All photos by Sarah St. Lifer] Only blocks from Williamsburg’s never ending party, Greenpoint Brooklyn is eerily silent on a Friday night. Save for a few stray cats, the streets are empty, and the businesses are closed. The only sign of life comes from a truck depot off McGuinness Boulevard, where three girls, two in bikinis and one in a ‘50s-style purple frock, are turning off generators and inspecting their tires. These visions in the night are the ladies of Queen Frostine, your friendly, neighborhood ice cream girls. I had the pleasure of interviewing Andrea (a.k.a. FluterScooter), a Juilliard-trained flautist and the founder of Queen Frostine, Genevieve (a.k.a. Punky B), a performance artist from Minnesota, and Chrissy (a.k.a. Miss Softie) a former advertising strategist, who make up half of the Queen Frostine army...

Fluter Scooter: This is my fourth summer working in the ice cream biz. I was one of the first girls to do the ice cream truck thing. They needed drivers and I was interested in creating a new breed of ice cream man, so I hired artsy types to drive the trucks. We can all bring different things to the table, and we’re not what you’d expect based on the job. We’re artists and writers, and Punky and I just recorded a song. In the past, I co-produced one of 50 Cent’s albums, and I’ve recorded with John Legend.

Miss Softie: I’m from Florida, but I live on the Upper East Side these days. I was working in advertising before I got laid off. At that point I said, “I want to work on an ice cream truck,” and I love it. I like to make people happy, and no one is unhappy when they have ice cream! Also, I get to wear vintage aprons all day.

PunkyB: I went to college in Vermont and just moved to New York in December to be part of an opera company, but I was broke and answered a Craigslist ad looking for an ice cream girl. I had worked at an ice cream stand before, which was a pretty cute job, and I like cute jobs. I wasn’t feeling [this job] at first, but when I met Andrea, I had a good feeling about her. I also like the idea of having my own little pod to work in all day. 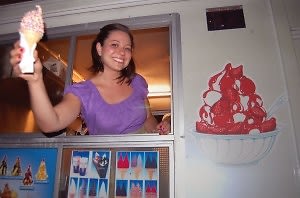 You each have a very distinct style. Can you tell me a little bit about your clothing choices?

FS: We each have different personas that we show off through our clothing. I’m the beachy one, so I’m always really tan. Punky is the punk one, Chrissy’s our pin-up, and Mandy’s our model.

PB: I like to add a little color, and I like doing tits. I add an accessory for the kids. My look is a little sex, a little toys.

MS: We’re also coming into a traditionally male business, so we have to be one part homemaker, one part mechanic, and we’re doing it in dresses and heels!

FS: People seem confused about what we’re doing in the trucks. I’ve had a lot of people ask, “Do you drive the truck too?” They always seem surprised when I say yes.

MS: We’re all smart kids. I was a Mensa candidate and we’re all college grads.

FS: I have a Master’s degree, but you have to be street smart too.

PB: I use a fake accent all day to come off more like a New Yorker.

Do people ever think you’re selling a little bit more than ice cream?

MS: Oh, yes. I’ve been proposed to by at least 7 hot dog vendors.

FS: I had a guy come up to the truck and ask, “How much per hour?” I told him the price of a cone and he just said, “Oh, wrong truck.”

PB: My outfit used to be tit city, but I had too many guys coming up to me who weren’t going to buy any ice cream.

MS: I always get, “What are you selling in there?” It’s an ice cream truck, but somehow people don’t believe we’re selling ice cream. 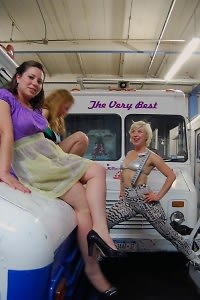 So, it’s definitely not prostitution, but would you consider this performance art?

PB: I definitely consider this a kind of performance art. I mean, this is all very theatrical, and we all have our own schtick.

MS: I like to blow bubbles out the window of my truck and I make balloon animals for the kids.

PB: We turn the trucks into our own little worlds.

Does the health department have anything to say about the bikini/ice cream combination?

MS: We follow the health code and we’re all licensed vendors. It’s a three month process to become licensed and we’ve all taken a health code course.

PB: We’re up to code. Some restaurants ask you to cover certain parts of your body, but that’s just a preference.

Do you have a favorite cone?

FS: I like the cherry dip or the blue dip.

MS: I like to get creative. I just did a sweet and salty chocolate dip rolled in crushed saltines. I dip everything in chocolate. The irony is that I’m lactose intolerant and can’t actually eat it.

As we’re leaving, Miss Softie turns to the photographer and says, “You’re a rainbow sprinkles, right?” extending the perfect cone out of the window of her truck, a delighted grin coming across her face when her question is met with a nod. So whether it’s the girls or the ice cream you’re stopping by for, Queen Frostine is always serving up something sweet.

Visit www.queenfrostineicecream.com to book the girls for private events, follow them on Twitter, or listen to Punky B and FluterScooter’s single “Ice Cream Girl.”