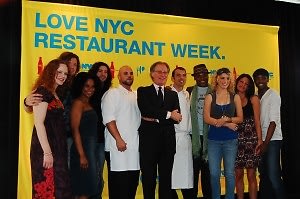 [George Fertitta, chefs. Photos by Sarah St. Lifer] The Shops at Columbus Circle were packed to capacity on Thursday afternoon as NYC and Company celebrated NYC Restaurant Week with the Coca-Cola Great Tastes of Summer event. Guests sampled food from Restaurant Week participants DB Bistro Moderne, Spice Market, Bice Ristorante, Porter House, and Tribeca Grill, while enjoying a live performance from the cast of Hair, who reminded us that, no matter how hard we try to move on, it will always be the Age of Aquarius. I had the pleasure of speaking with Daniel Boulud, restaurateur, TV host, and man about town, whose latest New York restaurant, DBGB, opened to rave reviews last month.

You recently opened DBGB on the Bowery (close to the GofG offices - lucky us!) How would you describe the vibe of DBGB, and how does it differ from your other restaurants?

I wanted to make a place where chefs would want to go and I wanted it to have the vibe of a brasserie. I had gotten some recognition for the DB Burger, but I wanted to make a more personal version of the burger at DBGB. My goals were to make the restaurant affordable, casual, and unpretentious, while making sure that it suited the needs and tastes of the neighborhood. 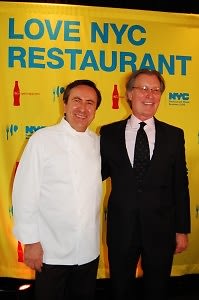 DBGB is just doors down from the former home of CBGB, and the name is an obvious nod to the iconic club. Are you a big music fan?

I've always been a rock 'n roll boy. I play loud rock music at DBGB, but I have to turn down the volume on when I'm uptown.

With the increasing number of food-themed programs on television, chefs are becoming mainstream celebrities. What sets your show, After Hours, apart from other programs?

I think that television is fantastic, but reality TV is not the reality of life. As chefs, we work late, and therefore don't get to spend a lot of time with each other. We don't have the chance to socialize at the restaurant and have such a short amount of free time after work each night. That's why I wanted After Hours to be so intimate and honest. It's like we are having a party at work.

Which chefs do you look to for inspiration?

I think that as chefs, we often inspire each other. Inspiration can come from anywhere, but it doesn't necessarily mean that I will incorporate those influences in my work. In terms of chefs that I look to for inspiration, I am a big fan of Thomas Keller and Daniel Humm in particular. I also think that David Chang (Momofuku) will make a difference in the history of food in America.

You have been working with Citymeals-on-Wheels for over a decade. Can you tell us a little bit about your work with that organization?

I am so proud to be associated with Citymeals-on-Wheels. I've been hosting an annual gala dinner with them for the past 11 years, and our most successful year earned over $1 million for the organization. I was recently presented with a photo of a G.I. who served in the war in Afghanistan delivering a meal to a veteran on July 4th, which was very moving to me, and reminded me why I do this work.

It sounds like you have an incredibly busy schedule. Do you ever take a break?

I'm taking a break right now! Actually, I'm going on vacation in a week and a half. When I'm on vacation, I don't pick up the phone, and I don't answer my emails. The best kind of vacations for me are 14-hour flights to Asia. No one can reach me and I can't reach them either.

For more information on Daniel Boulud and his restaurants in New York and around the world, visit his website at http://danielboulud.com.