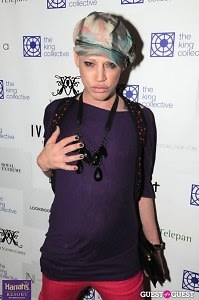 At last night's Gen Art Resurrection Benefit, Richie Rich couldn't find the bathroom. We wandered with him and his entourage through the labyrinthine hallways of the Hudson Hotel's Good Units in search of bladder relief, but the odyssey with the far out designer proved slightly more edifying. -

Crawling out of the bunker-esque subterranean lair of the club, we march up a staircase, then another, and head down a long, lime green hallway. Glitter-faced Rich is leading the pack with his on-again-off-again model boyfriend Ross Higgins and a few blonde designers and models in heels. Rich opens a random door to reveal, disappointingly, some sort of slovenly-kept storage closet. He's then lured deeper to the end of the passageway.

"I am finding you a private bathroom," Higgins declares--with determination, love.

"That's the lobby!" Rich says and recoils at the low-lit glow as he swills his plastic cup of chardonnay. His entourage is now squabbling with a bouncer who is giving the crew directions about re-entering the club. Rich removes himself from the kerfuffle with Zen calm and rests his lower back against the wall and kicks his left foot up behind him for added support. 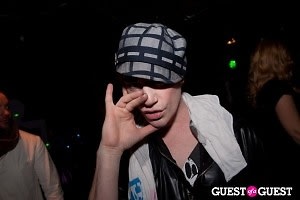 In a sparkly Anne Bowen top adorned with a Judith Leiber crystal owl necklace ("Snowy--he's like my good luck charm," Rich said), Helmut Lang boots, tight Chanel pants, and a floppy cabbie cap, he was the embodiment of high fashion. But he said given the hard times that Gen Art has fallen on, he had added incentive to attend the benefit.

"A lot of people don't realize how hard it is to, like, be a designer," Rich said. "You don't become Calvin Klein in one day, you know? People have to pay their bills."

He thus supports any organization grooming and financially backing emerging artists and designers. But did Rich himself fall on hard times when he was breaking into the fashion world?

"I was kind of lucky, cause I never really had obstacles," he said, "and I never really cared about them. Like if we had 99 cents and a pickle, we would make a show, you know? It's kind of that club kid mentality."

That scrappy innovative bent in establishing his designing career always gave him a sense of humorous resourcefulness and optimism.

"We always had a running joke," he said. "Club kids were like, 'if you have a zit on your face, just put a little glitter on and giggle.'"

But he realizes that to take the next step, major corporate sponsorships and business savvy are essential.

"The biggest challenge is like convincing Coca Cola we need 50 grand to help with the show or whatever," he said. "They're corporate, you know? At the end of the day, we would never make it tongue-and-cheeky. We would do what we were supposed to do and not embarrass them."

Does he have any special negotiation tricks up his sleeve? He said a return to humble brass tacks and substantive marketing should be the basis for any fashion label; any arrogance or posturing, he admonishes, should be left at the door.

"I think a lot of young designers; they're either really serious or they're really cocky," he said. "And you can't be cocky. I hate that that goes along parallel with fashion. I never understood that personality. Mentality freaks me out like that. It's like when you're in high school and everybody is at the prom like staring at each other across the room. Why don't you all just dance? And have fun?"

Rich is working on a book about the day he moved to New York through the present and also two new line launches (including Pop Luxe) for fashion week in February.Naturally, he is also creating a fragrance.

"It's going to smell like glitter pop bubbles of fun," he said.

As we wrap up the interview, we're concerned that he hasn't yet found the lavatory he so needed.

"I actually didn't need a bathroom," he confessed. "I just needed to tell [Higgins] a couple of things. It was so loud, I'm like, 'Can we just go somewhere?' We haven't seen each other for a while. We're like on and off. We just travel so much that we just don't seem to ever really...It is what it is."

And with that he marched to the staircase, where Higgins was waiting patiently. They then disappeared into the cavernous depths of the club.