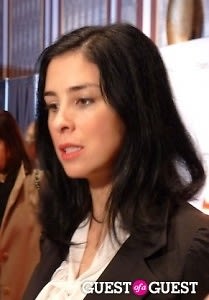 The comedian Sarah Silverman celebrated her 40th birthday by roasting Quentin Tarantino and dismantling rumors about her online habits.

“It’s a big comedian birthday, and I’m very proud of it,” said Silverman, who shares her December 1 birthday with notables like Woody Allen and Richard Pryor.

Silverman said that she was actually thrilled when the New York Friar’s Club Roast of Tarantino was rescheduled from October to December.

“What better way to celebrate your 40th birthday?” she said.

Silverman, who often jokes about her Jewishness, was unaffected by having her birthday on Hanukkah.

“I don’t have holidays,” she said bemusingly and explained that she didn’t like to travel.“I wish I did. I’m completely ethnocentric despite myself. I don’t want to be. I dream of going to foreign countries and seeing what’s its like, but then another “Law & Order” episode comes on and then what am I supposed to do?”

But when we asked Silverman if she had unfriended her ex, she had an interesting confession.

“I’ve never been on Facebook in my life!” she exclaimed and assured us that Kimmel was still a friend: “We’ve always been friends!” (But not on Facebook, apparently).

Sarah Silverman may not actually be on Facebook, but we wondered whether she was up on the contentious Wikileaks imbroglio.

“What is that? I keep hearing about this Wikileaks!” she said desperately.

When asked what her next project would be, she answered: