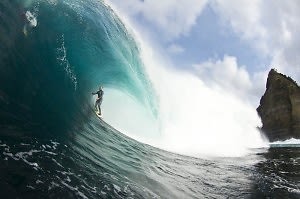 Saturdays Surf, a coffee shop and surf shop in SoHo, is attracting major love. The business recently celebrated its birthday at Wooly's, is drawing increasing buzz, and is launching its own line - in-house and at Bloomingdale's stores across the country - in a month. We hung ten (ie sat down and drank coffee) with owner Josh Rosen.

Rosen and his business partners Morgan Collett and Colin Tunstall have stocked the Crosby Street shop with boards, suits, and other surfing gear, as well as TommyGuns hair products ("for hair that lacks confidence"), glossy coffee table books, and surf-themed dvds . . . although, alas, that masterpiece Blue Crush doesn't seem to be in stock. Also available: really good java. 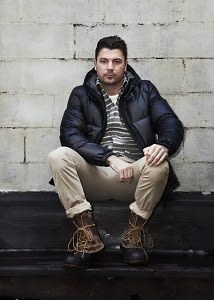 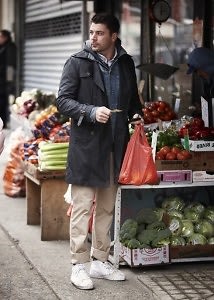 When not surfing, Josh is busy being stalked and profiled by GQ for his style sense. [Photos courtesy of GQ]

Did you always set up to run a surf shop/coffee shop, or was the coffee shop a necessary component of making a surf shop in New York viable?

I was raised in Seattle, and I was always into the restaurant business. So that’s one of the reasons I always wanted to put a coffee bar into this space. Another reason is that it’s cohesive with what we’re doing, which is creating a space for the New York surfer to come and be a New York surfer. The New York surf community is pretty specific to people who work in the city, which means business or marketing or fashion.

Exactly. Essentially, they’re guys who can’t live their lives in flip flops and board shorts on the beach. So the surf shop has to fit with people’s lifestyles. Coffee, a backyard, a more modern space, a more contemporary type of clothing – all of these go into creating a surf shop for the New York surfer.

How big/enthusiastic is the community?

New York’s the melting pot, right, so we’re getting people from all over the world – Brazil, obviously a huge community of people from LA, places like the South of France. These places with really heavy surf communities, that have more of a surf culture involved in the day-to-day life. They come to New York City, and they depart from that life a little. They’re like, “It’s New York City! It’s about nightlife, it’s about museums, it’s about living in the greatest city in the world, and that doesn’t necessarily include surfing. A lot of people have kind of forgotten what it means to be a surfer.

So you rebaptize the lapsed surfers?

[Laughs] Well, they’re just realizing that now, as it’s become more popular in the area. Just being in the New York Times it’s gotten a lot of press lately, and people are realizing it can be a part of their lifestyle . Of course it’s cold winters, but the suits now are amazing and can accommodate the cold surf.

I think the last place I saw hard-core urban surfing was in the river in Munich.

Yeah, and river surfing is just another indication of where we’re at as a sport. People are trying to do it by any means necessarily. You’re not getting diphtheria, but you’re in the middle of a freezing cold river in Munich, or you’re in Rockaway Beach, New York. To this day, after 8 years of living here and taking the A train, I get at least one person every time I take the train, curious as to what I’m up to, what’s in that big bag. But that’s another neat part of surfing in NYC – sometimes it’s still kinda foreign and alien. But when the waves get good . . . even in the middle of winter, there’s a pretty solid crowd of people out there surfing.

What’s your own surfing history? How'd you end up in New York from the West Coast?

My dad grew up in NYC, and my grandparents were here for their entire 95 years of life, so we would come to NYC from Seattle a couple times a year. So there was no question. Ah, the smell of burnt pretzels. I was an 8-year-old kid, and my dad was really excited to take us to the Village at midnight. I knew from those experiences that I would be here eventually.

I lived in San Diego for five years, college and then hanging out. I don’t even know how I would’ve been able to deal with college if I wasn’t surfing twice a day and I was in the water. Surfing saved my life in a lot of respects. A) it helped me recover from this brutal snowboarding injury, where I was in traction and I didn’t know if I would ever be an athlete again. And B) When I was sitting in class, smelling of neoprene and saltwater, it was awesome. It was like I’d just been in the ocean. It made for a very easy time at whatever else I had to do. And I realized that whatever else I was gonna do in my life, surfing was something I would seek out, because it’s a total solace. 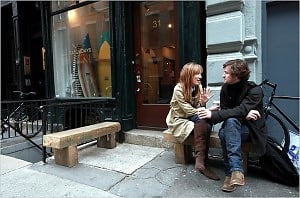 On the professional side of things, the store is very savvily run and has a very select grouping of merchandise. It's not a surf-themed grab-bag at all.

[My partners and I] are at an advantage because we worked in fashion for six years each. So we’ve got a good idea of what companies are producing good stuff. When it comes time to buy clothes, we know, okay, this company, the Stronghold, this guy is a surfer. And he builds his clothes from a surfer’s perspective, even though you’d never know from the outside. We look for that with every brand we bring in, which creates a cohesive selection of items. And we like everything to be made as locally as possible. A lot of brands come from California which, of course, isn’t that local, but we make sure they’re made in the US, made with local fabrics – or if not, then they’re from Japan or Italy, where the manufacturing is not done by children. 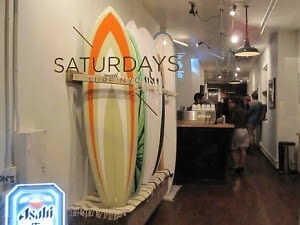 You know, there is always an underlying thing for surfers where you’re always in the ocean, you’re on beaches, travelling to the third world, so you’re attached to the global community that way. For example, you see pollution first-hand. When you’re in the ocean and there’s Styrofoam, pieces of plastic floating by . . . without sounding too hippy-dippy, you become a little closer to the earth.

There is a part of that in every surfer, although we’re probably the furthest away from that being in NYC. But there’s no question that every one of us has a bit of that inside of us.

Oh, the whole world does. We were a whole generation of children in the 70s, very pot-smoking, you always have a van of some sort that you can sleep in . . . the imagery is one of long hair, hippy.

I should note that your hair is not long, and it’s very slickly styled.

This is a 12-dollar haircut. But I admittedly dress very differently from the surfer stereotype, and so do my partners, and therein lies the direction of our clothing company and our lifestyle and this company. The direction will be a dramatically more thoughtful in terms of style and fashion. Words like "contemporary" and "sophisticated" are good words to relate to us. That’s just the way that we live, and we see a lot of people living that way, and we don’t see surf brands kind of getting it.

So now that surfing's on the rise, what should readers who want to get in good or get it on with surf girls and boys do? Any tips?

Any advice for those looking to get into surfing themselves?

Don’t surf at the beach I surf at.

Is that because they hog the water, or because you secretly don't like people?

It’s difficult to promote surfing, because one more person in the water is one less wave I could be getting. Really though, find a surf school and be respectful of other surfers. Enjoy yourself! It’s a life-changer. It’s an unbelievable physical and emotional experience. You’re physically getting a lot our of it, but you’ll never feel such clarity as when you come out of the water after a really good surf session. It is like baptizing. You go into the water and you wash away the sins, you wash away the garbage that is clinging onto you from your daily life.

Now I want to surf! How important is a sense of balance?

Uhhh. Everyone has a different level of balance. I would say that there’s a size of a surfboard and a wave out there for everyone.