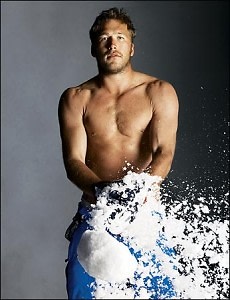 Bode Miller would rather be skiing. In New York to promote his limited edition Bode Bang Watch for Hublot, the Olympic gold medalist gamely answered questions, but his mind seemed far away, perhaps on slopes and schussing and other ski terms that we don't know. We asked him a few questions, then pondered why we ourselves aren't more relaxed/sporty/famous.-

Bode, who will turn 33 this year, has been a formidable force in skiing for almost ten years. His impressive record - more Olympic medals (1 gold, 3 silvers, and 1 bronze) than any US skier, 2 World Cup Overall Championships, and national or international victories in all five competitive skiing subcategories - inspires glowing analogies. Bode Miller: Skiing as Michael Jordan: Basketball. Or Megan Fox: Sexyface. Or Cheeseburger: Foodstuffs.

However, Hublot's impish CEO Jean-Claude Biver stole the show at the watch launch, gesturing emphatically, giggling about the company's recession-defying returns, and repeatedly comparing the act of watch design to impregnating a woman. Thus we fell in love with Jean-Claude Biver. 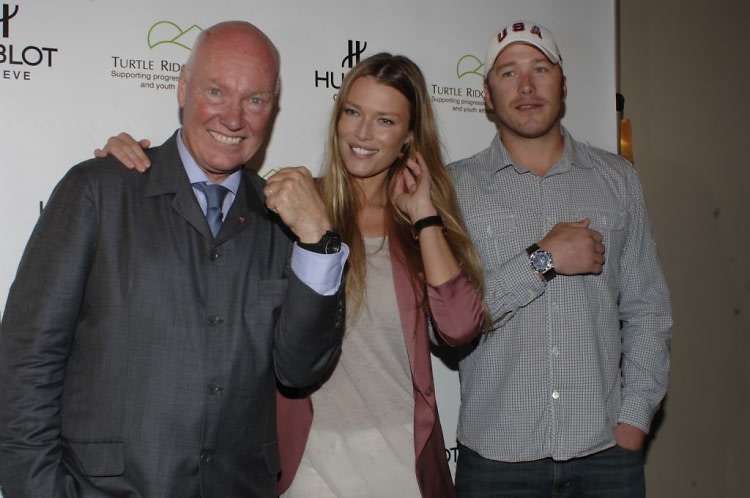 Jean-Claude Biver, Model Veronica Varekova (who naturally has her own limited-edition Hublot timepiece as well), and Bode

Other words of wisdom from the watch czar included:

"Sunday doesn't exist. It is a socialist invention. There is no Sunday for the cows."

"Sport is emotion! Sport is dream! Sport is success!"

As for Bode, Sport seems to be about enjoyment, pure and simple. The world-famous skier told us (and the other slavering reporters sticking recorders in his mouth and surreptitiously trying to measure his muscles) that he "never had the desire to be in the spotlight" and has observed a "zero change" in how people treat him post-Olympics. 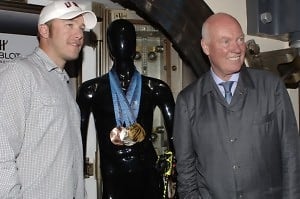 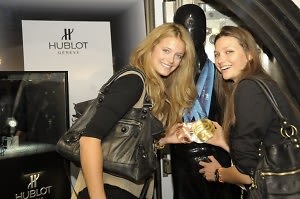 Everyone does like to touch the medals though, especially models Kate Bock and Michelle McCallum.

Bode also took pains to emphasize that the only shot of adrenaline he gets from his undeniably perk-ful athletic career is from the skiing itself. Endorsements? Eh. The post-race victory lap? Take it or leave it.

"I’ve already done [the victory lap] a couple times. This was my fourth games, third, fourth, and fifth Olympic medals, so I’ve done the whole medal thing. I think there’s value to that if you’re doing it to build your brand and promote or whatever, but that’s not what I’m doing right now."

And, although he does push for more races in the US, Bode’s not interested in upping the mainstream appeal of skiing or bringing the big bucks into the sport, either.

"With sports that are really mainstream and the athletes get really mainstream you forfeit a lot of your human rights, I think. You lose track of the positive aspects of sports in certain ways, and I think that can be problematic. When you do a sport because you love to do it You have a little bit more for kids, as a positive role model, because you’re doing something that you love to do." 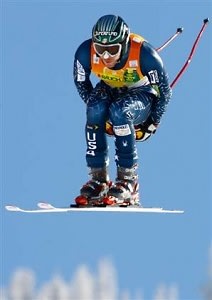 Bode enjoying himself. And yes, he does have his own Playstation doppelganger.

Plus, you're out of luck if you're looking for Olympic conspiracies or dirt; Bode shoots down a Vancouver rumor of last-minute missing equipment.

"The technicians, all the people I surround myself with are hyper-paranoid about stuff like that . . . They don’t let me take care of my own stuff because they’re worried I’ll mess it up."

And he politely refuses to smacktalk his old nemesis, US ski team boss Bill Marolt, when a reporter brings up Marolt's recent DUI and unpopular team finance choices.

"I don’t think it’s the position of an athlete to second guess that. I think our organization in particular is tough because it’s a not-for-profit. And I think that’s kind of a weird system to have. Yeah, I’ve always battled with them; I don’t necessarily agree with lots of their policies or how they spend their money, but it is the organization, and they do provide the opportunities for the athletes. They get into enough trouble on their own. I don’t think I need to throw them under the bus."

As for Bode's longstanding reputation as the wild child of US skiing, there was no trace of the hard partying, irreverent, capricious guy who was criticized in the US press for his comments about partying and skiing "while wasted," and slammed by teammate Daron Rahlves for always "trying to look for girls." In fact, Bode's coaches at Vancouver called him "inspirational," and the champion spent much of those Olympics . . . in his condo.

"I don’t think you necessarily have to skip the fun stuff of going out, because I’ve done it before, and I’ve had great success. I think if that’s where you’re at with how you enjoy yourself and how you get yourself motivated and feel really good and are excited, then that’s a critical part. Because if you don’t have that feeling, you don’t race well, period. But this year, we didn’t do much. And I was happy. I had a couple friends there, and like I said I didn’t really need to go, I didn’t need to push it. I was sort right where I wanted to be. We just sat in our condo, trained, sat in the condo, raced, sat in the condo, had to go to the awards, press conference, blah blah, but back in the condo, go eat, back in the condo."

So a lot of time in his condo, then. Could this be because by this point he's as bored at the Olympics as Meryl Streep is at the Oscars?

Bode has poked fun at his reputation and relationship with the skiing powers-that-be in the past, as in this 2007 video.

In other ways, too, Bode has stationed himself far from his youthful notoriety. These days, he owns an organic farm and runs The Turtle Ridge Foundation, a charity which sponsors environmental initiatives and athletic programs for underprivileged kids. At the launch, he further made it clear that he happily sees himself as part of skiing's old guard:

"With the way sports science is going, now you can ski until you’re 35, 36, 37 without any trouble at all. No one’s broken into their 40’s yet, but it won’t be too long. [Laughs] Guys have the ability, and the surgeries are better and the training is better, the equipments better. We're making it tougher for the young guys."

Here's hoping you break the 40-year mark with minimal joint reconstruction, Bode. But maybe you could say one bitchy thing about Bill Marolt? Just one? No? God, fine. Just keep doing ridiculous runs, then: