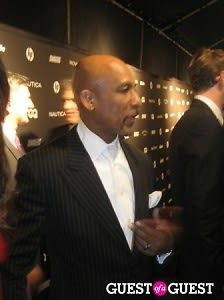 Day time talk shows may have defined the 90's for Montel Williams, but when we caught up on the carpet at last night's GQ Gentlemen's Ball at The Edison Ballroom , he spoke about his web-savvy entrepreneurial inklings. Find out why it's not just family drama and transvestites anymore for Williams:

Williams caught the entrepreneurial bug during his time on the poker circuit.

Williams and reflected on his Icarean descent.

"I also suffered the first day curse, because I got bumped out."

He philosophized a bit on his obsession with poker and how it led to his web involvements.

"Poker is one of those things I bet my wife would wish that it wasn't one of my favorite things to do," he said, "but I spend a lot of time playing. And when I had an opportunity to look at a lot of on-line capabilities in this company that's called Poker Training Network has a paradigm that's different from anything else that's out there. So we've been involved and we're now restructuring and building. This is going to be a wonderful venture. We are getting ready to change it to the Poker Technical network."

He's also impressed with the technical infrastructure of the site.

"And it's a company that over the last three years, they've basically built their own engine for on-line gaming. So they don't have to license an international illegal gaming site."

Does he view himself as a web entrepreneur?

"Well, I think because of a lot of things that I'm doing on the web right now, I've got a lot of projects coming. And I think 'web entrepreneur' would be almost an understatement.I've got a pretty big presence and the presence is getting bigger."

He wants to create the Montel Williams Network on the internet and impressed us with his growing web savoir-faire:

"Right now I have a Tweet presence. I have a Facebook presence that I am on about three times a week, four times a week. And that presence is getting ready to build even bigger."

The sky is not the limit for Williams; he knows there are footprints on the moon.