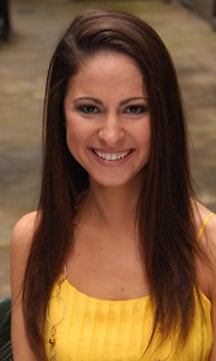 We're more than a bit in awe of Jasmin Rosemberg. At twenty-three, the bubbly Brooklynite bunked Standard & Poor, landed herself a column at the New York Post chronicling her Hamptons share house experience, and lived to write the bacchanalian tale. A slew of reporting gigs and media spotlights ensued (Life & Style, BlackBook, Page Six, VH1), as did a novel, out June 25th. How the Other Half Hamptons reads like Animal House 2.0: The Hamptons, with all the delicious cultural references and sartorial digs its location necessitates. In our current SATC-crazed enviroment, we can't help but draw comparisons to another, fictional NYC columnist, for while Rosemberg's fashion sense may be a tad less eccentric, she's just as endearing. We got the dish on Park Slope childhoods, old-school literary brat-packers, and what should be in every share houser's suitcase.

You grew up in Park Slope during its neopreppification; what was that like? Incredible! Park Slope to me is the best of both worlds: I grew up in an urban environment, where you didn’t need a car to pick up a gallon of milk and could hop the subway and be in the Village in 15 minutes, yet lived in a brownstone with a backyard and felt part of a quaint community. Still, Brooklyn always had such a stigma (in college, people would proudly tell me they’d been to Brooklyn “once” – to Peter Luger’s), so I’m pleased to see Park Slope finally recognized and growing.

When I quit my job in finance and moved home with my parents to “write a novel” - it was so strange to see the place I’d grown up in suddenly become so young & trendy! There was a time when no one went below 7th Avenue; now I’m amazed at the abundance of cafes and boutiques that have sprung up along 5th Avenue. What’s also interesting (and ironic) to me is that Park Slope has such a prominent literary community – I think it’s fate that shortly after I moved home, my soon-to-be-agent (Paula Balzer – who also reps the literary interests of Juno writer Diablo Cody & American Idol’s Randy Jackson!) set up her own agency not too far away.You majored in Econ at Penn, and worked for several years as a financial analyst .

How did you first become a NY Post columnist? Finance was really just something I fell into – perhaps the product of attending a business-oriented school during a time when it was glamorous (and lucrative!) to do investment banking. However, despite my summers (at Salmon, Goldman & Merrill, respectively!), after a year at Standard & Poor’s, I was so bored with cubicle life. My best friends happened to be in the entertainment industry (publicists, producers, etc.), so to fill this void I got really into New York’s event and nightlife scene, which always fascinated me. It was a natural instinct to write about these experiences, so I started freelancing for Allnightclubs.com – a predecessor to nightlife blogs and photo-taking sites like Joonbug – and for the next year, really used it as a vehicle to interview some fabulous people. Michael Ault (who owned Pangaea, SpyBar, Chaos), Serena Bass (of her eponymous lounge in the Chelsea Hotel, now Star Lounge), & Anita Sarko (legendary DJ at Area, Danceteria, Studio 54) particularly stand out. Then I heard the Post needed a twentysomething to write a weekly column about the Hamptons share house experience, and despite my reservations about writing so publicly (in first person!), I gladly volunteered.

Have you always loved writing, or was it initially just a release from financial investment hell? Did you ever consider doing a Wall Street tell-all? I’ve always wanted to be a novelist - the question to me was always “when?” Writing played a huge part in my life, but I never limited myself to just that (in high school, I wrote for my school paper, but was also cheerleading captain, danced, tutored math, conducted medical research, worked at the Gap on 8th & Broadway, and was one of those “clipboard girls” at nightclubs!) I hate to use the term “chick lit,” but the emergence of that genre (Devil Wears Prada, Nanny Diaries) by young urban women really convinced me I could do it in my twenties. Now, I’ve sort of divorced myself from the Wall Street world (and have no great desire to revisit that time!) but I’m really inspired by what I see daily as a celebrity and nightlife reporter, as well as by other great New York society writers. Jay McInerney (who frequented clubs with Literary Brat Pack members Bret Easton Ellis & Tama Janowitz) is my greatest inspiration, and as a New York columnist, I can’t escape the Candace Bushnell comparisons (not that I mind!).

When you signed on for a Hamptons share house, did you have any conception as to what you were in for? Not one bit! I knew “shares” were this thing a lot of people in my demographic did – like go to summer camp, or live in NYU housing over college summers, but I never really knew what share houses were like. It was shocking, on many levels. I am hopelessly urban (to me New Jersey is rural!), so my having to drive everywhere was sort of disastrous, and it’s not exactly fun getting ready in a bathroom while one girl is showering and you’re vying for a mirror with two others, and coming home to find your bed abducted (by multiple people) is pretty disgusting. Like one of my characters, I did the Hamptons expecting to find a glamorous scene – all the glitzy people and parties and clothing you always hear about – and was so surprised to find this camp-like culture so jarringly at odds with what is typically thought of as “Hamptons” (if it weren’t for the LIE, you’d barely suspect you’re in the Hamptons at all!). But the real surprise was discovering that, despite the nudity, the hooking up, the indulgent drunkenness, the masses (and masses) of people, I actually found myself liking it. 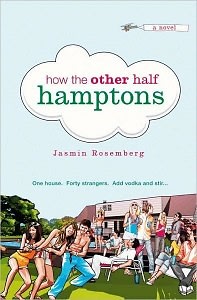 The title of your novel seems to have a bit of a class war angle. Is this present in the novel itself? Share houses are technically illegal – by way of the same outdated brothel laws that prevent some sororities from having houses in NY State, so there is definitely a resentment on the part of the community. One mansion might serve as a summer home to a single wealthy family, yet the one next door could harbor forty twentysomethings shacked up in bunk beds. Police intervention is prevalent but controversial, as these city kids bring a great deal of revenue into the towns, though as my novel depicts, their lifestyle is comically different! My characters get to see the other side of the Hamptons at a Hamptons Magazine event, and experience its discrimination in trying to get into a private beach or when fielding cop complaints, but aside from running into celebrities at nightclubs, these worlds don’t often converge.

Your novel promises plenty of "drunken escapades, explicit nudity, hot tub hookups, hideous hangovers, and juvenile mischief"; is the reality less juicy? I could have written three books with all the revelry I’ve witnessed! Just picture three consecutive months of spring break, or The Real World with five times as many people! Perhaps my greatest challenge as a writer was taking this setting notorious for drunken exploits and nonstop partying - and still making the characters/setting likeable.

Are any of the characters in your novel modeled after acquaintances? Will publishing it earn you any enemies? I hope not! The novel follows a group of three twentysomething girls who do the share house together – each with a different personality and different priority for the summer (one wants a long-term relationship, another a wild time). It’s hard not to be influenced by my own friends and experiences, but it’s not like one character is based on an ex-boyfriend or anything. Plus, there are so many people in a share house on any given weekend, that the characters often rely on nicknaming (“the dud”, “the bed hopper”). However most of the Hamptons notables/ celebrities/ venue names are real (and recognizable to any regular reader of Guest of a Guest!), since I wanted to preserve the authenticity of the environment whenever possible.

We heard you''re returning to the Hamptons this summer. Will you be staying in another share house? Sure – I’m in need of material for a sequel! I’m fortunate to have hospitable friends with their own houses, but I’m sure I’ll wind up in share houses at some point! I honestly think it’s so much more interesting to lie outside by a pool with lots of other young people than on a quiet beach with a few girls! I also think my publisher is organizing some sort of a “share house drive” so we can drop off books in conjunction with the launch. But if you do plan on staying at one of those huge share houses, I’d advise going equipped with: a large mirror (so you’re not reliant on the always-occupied bathroom); multiple cab numbers (especially on holidays); & a sleeping bag (even if you’re “assigned” a bed). Oh, and of course your copy of How the Other Half Hamptons (cue amazon link!) - Hachette Book Group, June 25! For more info, please visit http://www.jasminrosemberg.com.