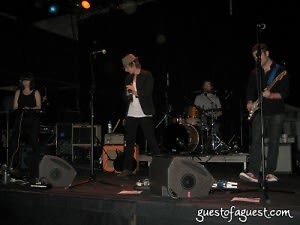 Last night, the band Action Painters were playing at the Music Hall of Williamsburg. Action Painters is a four piece local band with members Tom, Amit, Allison, and Joe. They have received press from various publications like Spin Magazine, Mash Music, The Village Voice and more. It was an 18+ show and was free of charge! Their set was lively and the crowd was very enthusiastic, with many of the onlookers dancing the night away right in front.

Allison, the only girl in the band, was a great keyboard player and knew how to keep the crowd pumped up! They played such a great show that many people on the train home asked me to recall their name. I proudly announced ACTION PAINTERS and exited with a smile.