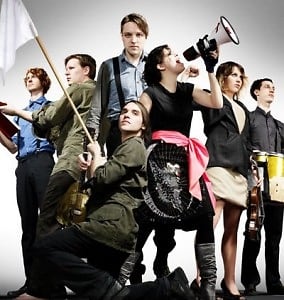 Arcade Fire's back. NPR is streaming their new album, which comes out tomorrow. They play Madison Square Garden Wednesday and Thursday. The music blogosphere is in a tizzy. And the Canucks are trending on Twitter! Miraculously,the erstwhile indie darlings might emerge unscathed as mainstream heavyweights.

Despite the all but guaranteed commercial success of new album "The Suburbs" and the tour supporting it, Arcade Fire is in a tough spot. Arguably the defining indie rock success story of the past digital decade, the quirky ensemble has straddled niche credibility and broad appeal for years. 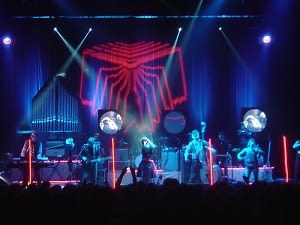 It would be tempting for Pitchfork to destroy the monster it helped create, to leave Arcade Fire to the tin-eared poseurs. But it has remained one of the group's leading  cheerleaders, even as the attention deficit disordered dolts on Twitter, who'd require A Clockwork Orange-style forced viewing to make it though a winding, erudite Pitchfork review, jump on the bandwagon and make Arcade Fire a trending topic.

At least we can fall back on Brooklyn Vegan commenters for vitriol. A crude hybrid of Pitchfork's music snobbery and Twitter's short-burst messiness, some readers had sympathy for Arcade Fire:

"Sounds like people are hating on Arcade Fire because now it is the "cool" thing to do. They build you up just to tear you down these days. Today's indie scene is a tough one."

"Sorry folks no Kool Aid in this house. This album is a huge letdown. We waited YEARS for this? Booring, plodding grade school poetry class lyrics come on 11:03 "Modern Man" is an embarrassment...Album should be called "heads up our own asses."

But the most accurate assessment was not of the album, but anonymous internet commenting:

"I won't judge the album with my own ears--I'll just read all the comments here and decide how I feel. Thanks, BV commentors!"

As for my own ears, I'm digging what I've heard so far, despite a polished, borderline overproduced sound and an unexpected (though not entirely unpleasant) mishmash of genres, including a disco track, Sprawl II (Mountains Be...), that ABBA would admire.