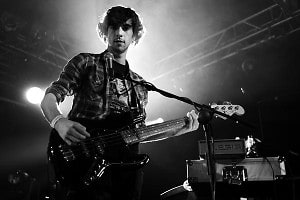 The annual CMJ Festival came and went in a haze of indie bands, dudes with facial hair, late nights and cans of PBR. With over 1,200 bands over five days and venues spread throughout the city, it would be overwhelming to see every band you wanted, if not impossible.

Even the most carefully crafted schedule (assuming you made one) can get a bit tiresome to follow given the general malaise that sets in after a night or two of hauling yourself across town to a new venue every 45 minutes. Often times the result is to pick only one or two venues with a guaranteed hit show, and take your chances with the rest. If you end up watching a horrible band, "the next one might be better" can easily become the mantra of the night.

But along with misses and aural discomfort, come hits and the discovery of new iPod favorites. Below are ten bands that were/are worth checking out compiled from things I saw, things I read about it, and recommendations from concert-goers at the bar or on the street.

This band is included on just about every Must See list and for good reason. They were highlighted by everyone from Spin Magazine to the random girl who stole NY Press writer Greg Burgett's notebook while he was drunk to write "Two Door Cinema Club rocked my world. I want to do those cute little Irish boys."

Whether or not you're a fan of Nascar, if you have a sense of humor you will love the fun, authentic Daytona 500 style of this band. It's the best use of helmets since Daft Punk. If you missed them Tuesday night at Santos because of the line, you were probably able to catch them at one of their other four shows.

Hank and the Cupcakes

Sound: Electro-Rock Hometown: Brooklyn, NY This band has been on the NY scene for awhile, at least enough for me to have several friends encourage going to see this show during the Tadiumred showcase at the Delancey. Don't let frontwoman Cupcakes adorable name mislead you, she channels Karen O with strong vocals and can seriously bang the drums.

Sound: Rock Hometown:Brooklyn, NY Able to break it down on guitar or sing a capella, She Keeps Bees plays solid rock and have a sound that is frequently compared to P.J. Harvey. Frontwoman Jessica Larrabee casual banter makes you feel like she'd be someone fun to grab a beer with even though you know you shouldn't spend too much time hanging out at Cake Shop during the middle of the workday.

Sound:Pop Rock Hometown: Brooklyn, NY Playing a bunch of shows during the festival, they were so good at Crash Mansion I had to drag a friend to check them out again when they played Spike Hill. They're getting love from the press with the Village Voice describing them as "an enchanting mesh of old-school energy and new-school melody," while NPR hails their sound as “joyous power-pop."

Sound:Psychedelic/Space Rock Hometown: Brooklyn, NY Hookey, spacey and just plain fun. For those who like to see grown men wear feathers and sequins, this is the band for you. Their Twitter feed offers up such tips as "Forget everything you know about unicorns."

Sound: Sissy Bounce/Ass in the air/Hilarity Hometown: New Orleans, LA Big Frieda has been playing around New York a lot lately, eliciting various reactions from the crowd at both PS 1 and the Jelly Pool Parties this summer. There is really only one way to sum BF up: Booty. Lots and lots of booty.

Despite being just 19 years old and from the Midwest, Dylan Baldi held his own during the festival, rushing from one venue to the next in one night and playing five shows total.

I missed this show at Cameo gallery, but wish I hadn't. Robby Carado from Reverb said they took the stage "with more confidence than any group I have seen this week and delivered one of the most memorable shows, with bone-rattling bass lines, a stellar drum performance and a three-pronged vocal attack."

For those who hit the show at the Delancey, they got something different than they bargained for. Lead singer and guitarist Ryan Lynch took the stage with out the rest of his band, giving the performance a more folky feel.