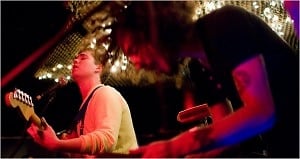 Miss the Pool Parties already? Was you last outdoor concert rained out? Or end in a riot? Don't despair. CMJ Music Marathon, New York's annual indie rock smorgasbord, is coming back to town October 19th-23rd. And the initial lineup is up, with many, many more bands to come.

CMJ (or College Music Journal) calls its yearly festival a marathon, but it requires a bit of sprinting. 75 venues (most of them scattered around the Lower East Side and Williamsburg) will host 1,200 live performances over five days and nights for the 2010 installment of the 30-year old conference.

The festival's sprawl is its frustrating weakness and greatest strength. Even the most devoted and discerning rock fan would be overwhelmed by his choices and fret over the ideal itinerary. And the more tenacious acts at CMJ will probably require an onstage defibrillator to keep them upright as the touring grind wears on. Surfer Blood, above, made news last year after playing 13 sets in less than a week. The masochists will be back in October, with a considerably larger fan base to get them through the slog.

But not knowing exactly what to expect and where to find it leads to exciting surprise discoveries. Consider the splash the then-unknown Arcade Fire made in 2004 at 1am at the intimate Mercury Lounge, as described by Gothamist:

"The early morning hour rolled around quickly and we found ourselves in the front of a packed room, energy dripping from the ceilings...everyone was ready for something...They seemed innocent to us. Like they had just discovered the world and were showing us what they were seeing. Hopefully as they gain more experience they won't lose this innocence. Gothamist thinks they'll be just fine as they become more than just 'the flavor of the month', this band revived our faith in the music scene last night."

No band since has had quite as big a break at CMJ. Music critics will no doubt remind you of this as they report on the event, just as they have for the past five years. But here are some bands, some of them with already established buzz, that are going to try in two months: