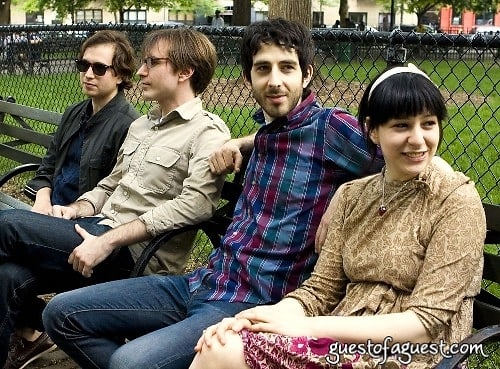 Despite their status as relative newcomers to the New York music scene, Murder Mystery has been steadily gaining popularity since they first set up shop around Williamsburg. Equal parts in your face and irreverent, the band's style has evolved along with its songwriting. As their sound continues to defy strict definition, they describe themselves as a band in which "none of the songs are personal...they are usually about candy..or at least that's what I imagine them to be about when I play them and smile." In keeping with this ethos, their tunes are multi-layered confections that are fun to unwrap and hard to put down...

Many artists have day jobs to make ends meet. What are the strangest and/or most pitiable side gigs you’ve taken to pay the rent? Chicken suits and all…. Foot fetish parties. Not really, but I considered it. It was a low point. I’d be much wealthier had I done it. Pickles considered editing porn before. He probably should’ve done that too. None of us have done anything too strange. But almost all jobs are pitiable. No chicken suits or anything… but I’d like to wear a fat suit. I don’t know if there’s a job for that, but I’d like to wear a fat suit.

Where do you see the recording industry going in the next ten years? I think it’ll be right where it is now. At the mercy of Fred Durst and Jay-Z?

What kind of music did you listen to while growing up? Music our parents and siblings listened to – classic rock, motown, soul… you know, the 60’s pop, the 70’s punk, Michael Jackson, MC Hammer, 90’s rock. A little bit of gangster rap during the angry years.

How did you come up with your band name? It was the only thing that didn’t make us all cringe. Also, it had no “The”.

What parts of the city do you live in and what you drew you there? I currently live in Gramercy because it’s very convenient and pretty. Everyone else in the band lives in Williamsburg because it’s where all the “hip” musicians live, I hear. It’s part of the territory. Also, it’s where our rehearsal space is.

Favorite venue? The best venue in New York that we’ve played is definitely Music Hall of Williamsburg. The sound is great and the staff is really friendly and fantastic.

You are faced with a steaming pile of French fries. Mayo or Ketchup or something else? Definitely ketchup. Graham would probably go with mayo and ketchup and hot sauce and mustard and barbeque sauce and sweet and sour sauce and soy sauce and egg sandwich.

How would you describe the band’s sound, other than loud? Melodic, poppy, jangly, fun and above all, sexy.

There’s a musical Last Supper and you get to pick the guest list. Who would you invite and why? Both the living and the dead are welcome to break bread. Oh snap, obviously Michael Jackson. Paul McCartney cause he’s a genius. Brian Wilson cause someone’s gotta make sandwiches. Smokey Robinson cause he’s a lyrical master. Stephen Malkmus, Jarvis Cocker and Stuart Murdoch. Kurt Cobain cause Pickles would want him there. Wait, how many people can I invite? Pickles would also want REM there, but they’re all vegetarians and all 7 of our courses are gonna be jam packed with bacon so they can come but they’ll have to provide their own food. David Byrne. Maybe Biggie. Maybe Billy Joel if he can keep it together. 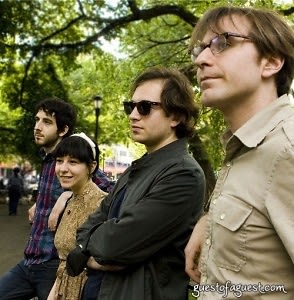 How does the division of labor break down amongst the band in terms of lyrics, layering the sound, dealing with execs, interacting with fans? Is this agreed upon or just happened? Writing songs is always collaborative. Usually Jmo or Pickles will come in with a section of a song or a loose structure or riff that we will all jam on together. Eventually it starts to take shape and we all brainstorm on what sounds best. We try to play new songs over and over like this to work out the kinks until we all come to an agreement on what sounds best for the song. But it’s always an ongoing process.

Months after we’ve finalized it, someone may have a new idea so it’s always changing. Lyrics are usually the last piece. I think Jmo has a sense of the sounds that work best in the melody and after playing a song over and over again, the sounds start to become words. And sometimes they just stay sounds. Everything we do as a band is organic. There is no rigid division of labor. But if there was one person who took on the brunt of the boring logistical work it would definitely be Pickles. He’s a champ!

What’s the worst-named band of the last 30 years? Oh man I love this question. 5 Guys and 4 Hamburgers is one of the best-worst band names. Also, we played with a band called Straight Punch to the Crotch. That deserves mention here. There are a bunch, like “Butt Stomach” and “Count Dracula’s Weed Smuggling Jam Engine” and “Car Full of Midgets”. But in terms of well known bands, I think “Panic! At the Disco” is pretty terrible, as is “ Limp Bizkit”. I donno, they’re all bad.

Do you believe commercially viable bands that struggled for many years to find their industry niche but eventually start playing stadiums are “selling out” by debasing their art or are they seizing the opportunity to cash in on their well-deserved success? If you’re making the music you want and 25,000 people want to pay $150 each to see you play at Creflo Dollar’s stadium, it’s not selling out, I think selling out is changing your music for the execs and the suits who want to make sure you’ve got that radio friendly “single” or something that’s gonna make them rich. Selling out is compromising your music and taste for a paycheck. If you can do what you want and make music the way you want and still sell out stadiums doing it, then good for you. You’ve cracked the code.

*Laura is the interviewee

[All photos of band by Etta Shon]