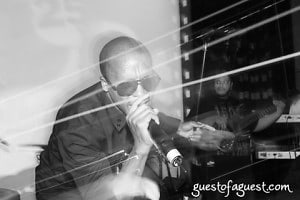 Go HERE for more photos from this concert by Antwan Duncan

Antwan hits up the Lupe Fiasco concert last night...where he got to witness first hand the artist that managed to bring his fans to tears....

Last night"s Lupe Fiasco concert at SOBs was one of the most high energy and enjoyable shows I have been to in the last few years. Everyone in the crowd was "fresh to death" and all there for the purposes of supporting one of the more creative minds in the HipHop world. Lupe Fiasco"s The Cool is one of the most innovative and easy to listen to albums I have ever come across. With a blend of catchy melodies and cunning rhymes he takes listeners to the places he grew up and through the experiences of his time. He has the stage presence of someone who has been in the business for a much longer time frame than he has and always manages to keep all eyes on him at all times.

Everyone sang along to the tracks they knew and the ones they didn"t he guided them through. At one point he got emotional and began to cry and, looking around I noticed that he was not the only one. Women, girls and men alike were all tearing up as he gave his all on SOBs stage lastnight. With the band 1500 or Nothing and his dj and featured singers, Matthew Santos and Nikki Jean at his side, Lupe Fiasco is an unstoppable force that I would love to see sweep this city again.