[Projected Photo of Michael Jackson at 40 by Ebony Magazine in 1985] Back in a faraway land of leg warmers, big hair and rock ballads, b.k.a 1985, Ebony Magazine commissioned Chicago artist Nathan Wright to create a projected picture of what our beloved M.J. would look like at age 40.  A caption next to Wright's portrait, on the left, predicted that Michael would "age gracefully, and acquire a handsome, more mature look"- probably an accurate prediction if Michael had let nature run its course on his (at that stage) slightly altered face and skin color.  Needless to say the sad irony abounds. The picture on the right, of course, is what the pop star actually did look like in year 2000..

after many needless and distorting plastic surgeries and speculated skin treatments.    In this cautionary tale of so many sorts, Michael evidently was not pleased with the man in the mirror and paid the price.   One of Ebony's predictions was on point though - Michael's fan base continued to grow exponentially, and had likely increased ten fold by 2000, as he became the rock icon of the century.

Meanwhile, the saga continues to unfold as new rumors emerge that Michael Jackson has another 25 year old son, Omer, who bears a striking resemblance to him and sat in the front row at his funeral.  Looks like the never ending public fascination with Micheal's life and his children won't be fizzling anytime soon.   And for anyone wondering why Michael continues to captivate our attention, here's one from the archives of MJ looking pretty bad ass in the center of this motley and amazing crew: 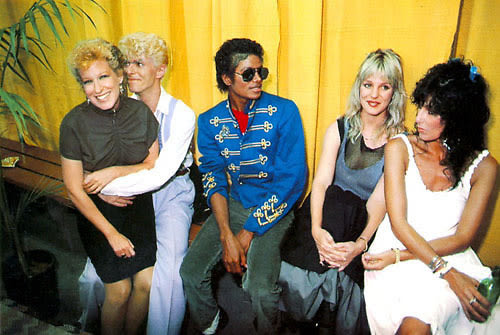