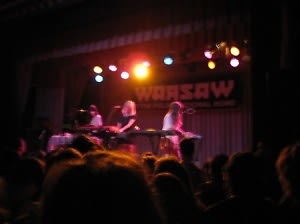 In Margot at the Wedding Nicole Kidman tells her sister not to move to Williamsburg because it's "for the young." After I got my Northside badge at festival HQ on Bedford Avenue I enjoyed gratis Heinekens (ah, the fringe benefits of evil corporate sponsorships), scanned the crowd and realized, with a bit of nausea, that I was, at 26, the oldest person there.

No matter, I had my all-important lanyard on, giving me an aura of invincibility and power as I made my way from Williamsburg to Greenpoint through McCarren Park. Nevermind that half the people I passed were wearing the same badge (they cost $50 and are well worth it); I was an insider. After a brief pit stop to watch a crew of dressed-down hasidim play baseball, I made my way to Driggs Avenue and Warsaw at the Polish National Home. 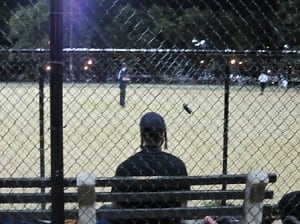 Warsaw is a great, spacious venue with slightly subpar sound that looks like a faded Broadway theater with the seats removed. A Polish social spot, the auditorium and its bar annex could be the only rock concert destination in the city to sell kielbasi and pierogi to young indie types as they sway to the music.

Hipsters get a bad rep for so many things, but standing still, arms crossed, listlessly taking in great tunes at live shows is one of their worst offenses. Thank God the Warsaw crowd had some pep. At 10:15 Brooklyn's very own The Hundred in the Hands was midway through its set as openers for Au Revoir Simone. Hundred in the Hands played some very uptempo, almost dancey "disco house" songs I dug to the point where I'm investigating their catalog (through MySpace) as I write this.

Opening acts typically serve as a crescendo to the headliner, but the much buzzed about Au Revoir Simone put on the brakes when they took the stage at 11:30 or so. But the crowd was eagerly expecting the three-woman act (also locals) to take things down and notch and bliss out with its dreamy, dangerously catchy electro-rock. 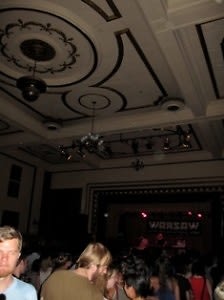 Members Heather D'Angelo, Erika Forster and Annie Hart do not have the most commanding or raucous stage presence--just three pretty ladies doing their thing behind their keyboards. But the effect is charmingly lethargic and appropriate for the group's winsome music. This is, after all, an act whose (arguably) biggest hit starts off "Play me a sad song, 'cause that's what I wanna hear, I want you to make me cry." In a bold departure from setlist norms, they played that tune, "Sad Song," just minutes into their gig as the second entry.

From there the set tapered off a bit as the ladies played some slower pieces between announcing  pregnancies (Hart's) to crowd applause and, with mock anger, defending their live performances against complaints that they're "canned." Continuing the fun and welcome lack of self-seriousness, the girls capped off the show with a joyous cover of Don Henley's "Boys of Summer," during which Hart upped the energy level with some incongruous headbanging.

Sadly, I failed to spot Au Revoir Simone's biggest cheerleader, David Lynch, in the room. And he doesn't exactly blend.