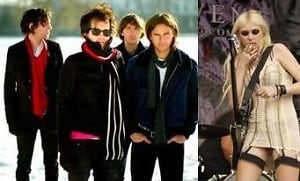 The CMJ Music Marathon will all but monopolize downtown and Brooklyn rock clubs October 19-23. Today, the sprawling festival announced a second wave of participating artists. Test your indie savvy and see how many you recognize. Not many? Take our tips on how to fake it 'til you make it.

Of the approximately 15,612 acts currently slated to perform, I've heard of 15 and actually heard 7. It's a painful invalidation of musical cred, but this is what I've got:

Phoenix and Ghostface are the really big names here. But I guess I have to applaud Alexandra Richards on her unlikely ascension into the the ranks of the too cool for school. Could the Playmate and DJ actually be a cut above the usual dilettante celebrity spinner? I guess you'll find out next month, for her CMJ showcase.

In the meantime, check out our CMJ cheat sheet from last fall. And keep in mind that a running joke at the festival is the preponderance of bands with nearly identical names. Think of the Crystal Castles/Crystal Stilts/Crystal Antlers trifecta of 2008. Or the Great Wolf Band Panic of 2005, when a pack of eight wolfish acts (including future stars Wolf Parade and returning favorites AIDS Wolf) shared the spotlight.

The Armchairs, Arms & Legs, and The Arms Akimbo