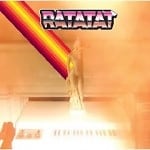 To kick off the first track on their first album, Ratatat announced: “I’ve been rapping for about seventeen years, OK. I don’t write my stuff anymore, I just kick it from my head.”

And, including a live show of theirs I saw in Nashville, these are pretty much the only words I’ve gotten from the duo. Their third album, released today, with its deadpan title of “LP3” once again leaves all the talking to 12:51-esque sound of Mike Stroud’s guitar and Evan “E*Vax” Mast’s synthesizer. Combined, the two emit a wide range of sounds, from goofy licks that sound like stuff from an old arcade game to great hooks that really should be Kanye’s next "Stronger". Their great new sound, say disco meets new age, is back again today, with 14 new songs.