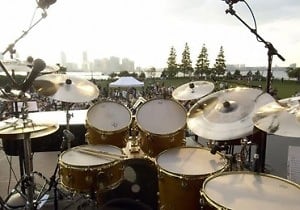 [Image via River to River] World-renown composers and famous contemporary visual artists in one space? What more could one want in an evening? The second night of its US premiere, the visual and audio artists involved in the SHE WOLVES project transform another outdoor river space with the unique sounds and visual effects (it changes depending on the space) to awaken the mythological SHE WOLF.

Sounds a bit spooky and silly, but I'll admit but I just love Kiki Smith. She's obsessed with fairy tales and mythology, it's no wonder she's involved in this multi-disciplinary art ensemble. I need to get one of her self-designed T-shirts from the GAP (in association with the Whitney Biennial) before it's too late (though, I'm sure they have already run out of smalls).

The art ensemble began in Rome in accordance with the Tevereterno festival, which calls "for the revival of rivers internationally". River to River festival is hosting the second half of the festival at different locations throughout the city this month, obviously near the river.

The Hudson is in some need for an artistic revival, remember the Hudson River School of painting? If you have difficultly remembering, it means it was that long ago, 19th century to be exact! Maybe the howling of the SHE WOLF will have us singing another tune. Artistic revival here we come.

The art project ends tomorrow May 30th. Tonight the show begins at 9 PM at Castle Clinton, and tomorrow its at 9:30 PM at South Street Seaport.