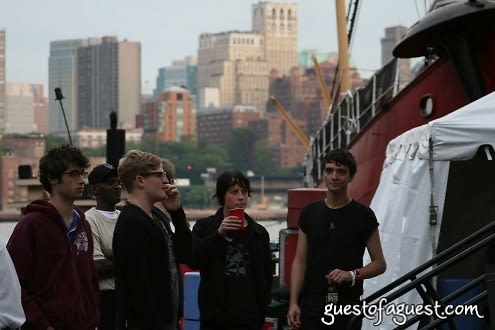 Go HERE for more photos from this event by Kristen Peice

The band Wire has had many break ups and regroupings since 1976, but they still know how to entertain a crowd. Three of the origianl members played a free show on South Street Seaport on May 30th to a very enthusiastic crowd of retro and neo punks. The opening band DIE DIE DIE was a young band from New Zealand that managed to work the audience into a frenzy with the trios beating on their guitar, bass and drums. Wire's set was more reserved and much more civilized, as dignified as an English punk band from the 70's could be considered.

Wire played a song they never played live before and played many older crowd favorites that they rarely play live. Wire's bass player, Graham Lewis was the most visual aspect of the performance with grimaces and ripping power chords that were the only remnants of what of you think of when remembering 70's English punk. This show was the start of the free summer concert series River to River and it was a welcomed start to a summer of many more great free shows to come.

[Delights By The River-to-River]