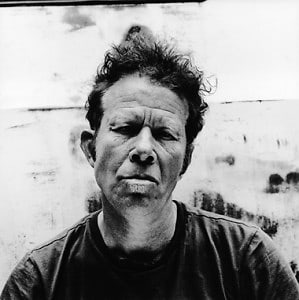 You may not recognize Anton Corbijn's name, but you've seen his work if you're a fan of U2, Depeche Mode or a slew of other musicians. His latest, "Inwards and Outwards" just opened at the Stellan Holms Gallery and features black and white shots of creative cultural icons.-

Not content to merely elevate rock photography to an art form, Anton expanded the scope of his lens to focus on other artists. He started out doing portraits in the late '70's and was lucky enough to meet and form a bond with U2. From his relationship with Bono, he met others and quickly became one of the most sought out photogs. He's done over 75 videos music videos, almost all of which you would recognize from when MTV mattered,  including  Nirvana's 'Heart Shaped Box." His most recent work saw him digging deeper into film with the Joy Division biopic “Control” and the George Clooney thriller “The American.” With this show he returns to portraiture. 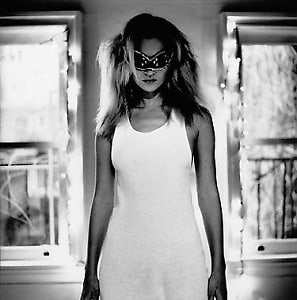 He describes it to the NY Times as "getting back to basics."

"There’s an appeal to me in the life of the photographer — one camera and meeting people. No lights, no assistants, just me taking the photograph. The really simple approach to photography is a great balance to making the films. So I really appreciate that life again after making films."

Though his work could be considered "minimal" it doesn't make it less complex. Instead, it adds a sense of intimacy. Kate Moss stands with a mask over her face in a white dress; Tom Waits looks directly into the camera, each line on his face highlighted with shadow; Bruce Springsteen looks rustic standing next to a horse in the gentle sunlight; Alexander McQueen looks gangster with his turtle neck pulled over his face; and Iggy Pop crawls naked in the forest.  There are also images of Richard Prince, Tricky, Anselm Kiefer, and others.