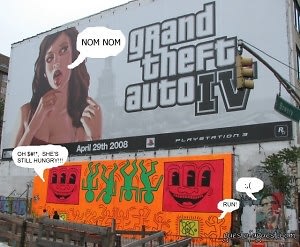 “Look up there! A giant lady is despoiling the art!”

New Yorkers panicked in fear today as a 50 foot in scale woman attacked the innocent art of Bowery today. People gawked in fear as the giant creature stood, affixing its steely two-dimensional eyes upon the populace as it was tonguing what appeared to be a large red orb of some sort whilst staring hungrily at the word, “Grand”. Speculation suggests that it was doing this to avert its own true hunger in wishing to devour the residents it was splayed next to.

While people are still unsure of the origins of this terrible creature, the police came out to calmly remind people that it is nothing more than a publicity stunt, before they saw the creature reached over and began to devour the Keith Haring-inspired mural. Reaction was swift and special forces quickly isolated it with a large black “Playstation 3” barrier before getting things in order again. One mural, seen to the lower right, sustained minor injuries from almost being devoured by the 50 foot creature, and is currently under intensive medium care.

There is something disturbing about seeing a huge mural to a video game trump some of the cultural mediums of New York. Granted, it’s one of THE video games that everyone knows about, and I guess it deserves some acknowledgment since it is inspired by the Big Apple, but does that justify it being so prominent in a wall that features some rather interesting pieces?

It’s not like no one forgot what GTAIV is. It wouldn’t surprise me if there are little fetal children learning to read by intravenously web browsing cheat codes for the game. If this was any worse, then they would be flying cargo ships over our fair city and dumping pamphlets from the sky with general universally understandable symbols to proclaim that GTAIV is coming out. Er, came out.

So are they going to remove this thing now or not?!