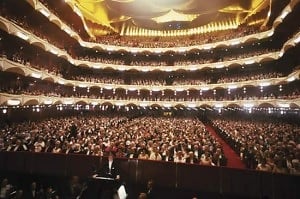 Concerned about the long-term viability of the Met and its graying patrons, trustee Varis is on a mission to pump some new blood through Lincoln Center. But will Generation Tweet take advantage of the steep weekend discount--orchestra seats typically run from $130-320--and overcome attention deficits long enough to enjoy 3-hour foreign language arias?

Varis think so, and she tells the Wall Street Journal 's Erica Orden why:

"The opera's like Broadway but better. It's got sex, it's got incest, it's got rape. You introduce young people to music, you've got them for life."

The deal builds on a previous rush ticket special, also courtesy of Varis and Karl Leichtman, that began in 2006 and subsidized 200 $20 seats for each weekday performance. It extends through the 2010-2011 season (with the exceptions of two weekends) and makes 13,600 seats available for the price of two movie tickets, or less than most scrappy off-Broadway plays.

Varis' donation is well-timed. With the success of Glee giving young musical theater nerds the validation they've craved since that atomic wedgie in 4th grade, it's reasonable to think opera could also benefit from a teen and 20-something boom in popularity.

Lest more seasoned opera-goers feel slighted, Varis says the subsidy will also help out the Metropolitan's starchy bread and butter:

"The older people who have retired, they can't afford the orchestra tickets and they can't go upstairs where it's $30—they'll get a nosebleed."