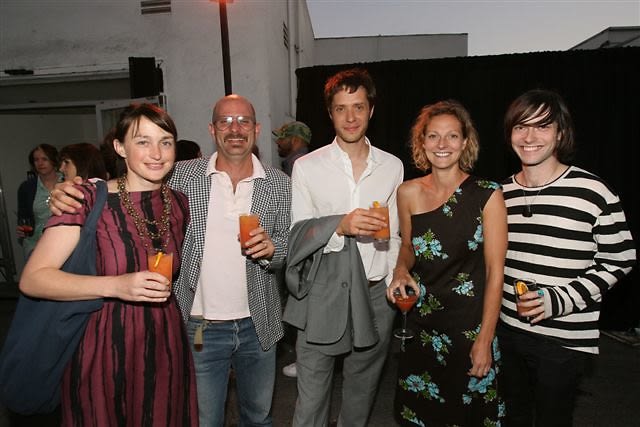 [Guests drinking at House of Campari. Photo via Getty Images]

The LAXART and Campari partnership provided another successful event with the debut of the latest exhibition in the House of Campari presented Project Space on Saturday evening. Over 500 art and Campari enthusiasts gathered at LAXART to view Miguel Angel Rios’ single-channel video entitled Crudo (2008), selected by Gilbert Vicario, assistant curator of Latin American Art at the Museum of Fine Arts.

Rios’ Crudo takes the viewer on a theatrical, percussive journey led by an unidentified white-suited man, wielding pieces of raw meat, who encounters a group of angry dogs. Mixing elements of dance, the percussive footwork drives the tension of the piece, offset by the pieces of raw meat that swing around to provoke the angry animals. The characters in Crudo describe order and disorder, control and unpredictability. Crudo plays with a range of strained dichotomies particular to relationships of power, while questioning their logic and maintaining a narrative structure that remains opaque and without resolve. Director Lauri Firstenberg “complained” that the exhibitions in the Project Space have been stealing the thunder of the projects in the main space and mentioned that several institutions had already been by to check out Rios’ latest piece.

The gallery doors opened at 6 PM, and guests who arrived early were treated to an exclusive walkthrough with the artist and LAXART's curator, Aram Moshayedi. The general reception began at 7 PM, where LAXART welcomed a steady flow of guests making stops at a few gallery openings in the area. Throughout the evening, the back patio of LAXART and Campari bar area seemed to host more guests than inside the actual gallery. Upon viewing the Project Space, many gathered outside to enjoy the warm evening and to discuss Crudo over Campari cocktails. There were approximately 481 Campari cocktails served in exchange for donations to LAXART, raising $348.57.