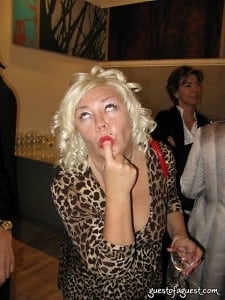 Last night we were lucky to attend the opening reception for Norwegian artist Unni Askeland's exhibit  FRIEZED:BLONDIE IN THE FOREST. The exhibit, held at the Heiberg Cummings Design studio will be  up from October 30th-Nov 21.  Guests were treated to the amazing vocals of blues singer Terri White, while Unni bounced around the room making sure to talk to each arriving visitor. The artist, described as the "enfant terrible" of the contemporary Norwegian art scene, lived up to her glamorous reputation as she sipped wine in a  audacious leopard print dress.

More Story and Photos by Ari Cohen below...

A little later on I slipped a velvet robe, that I had just purchased for my Halloween costume(mix between a genie and a wizard), on Unni. She wore it with true royal splendor. 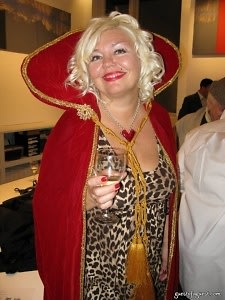 This exhibit of landscapes depicting the country surrounding Oslo, Norway was a departure from Unni's well known pop art paraphrases of 20th centruy icons. In 2006 New York welcomed Unni's Big Blonde series of portraits depicted famous blondes from Mae West to Marilyn Monroe.Guests of the opening included a who's who of Scandanavian art lovers including, Ina Johannesen, Turid Meeker,Terri White and many others.  Unni's art work shares in the tradition of other New York pop artists, like Andy Warhol, who used iconic images of themselves and other celebrities to make statements about contemporary society. Hopefully you can catch Unni running around town this weekend, I hear she is looking for a  Halloween party to attend. Wouldn't she make a great Marilyn?