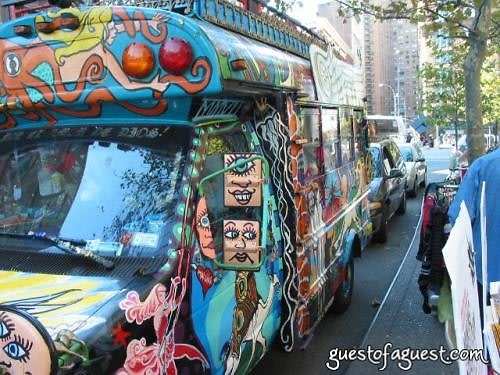 You don't have to go far to get a taste of some of that. Kat O' Sullivan has her own little psychedelic magic bus parked on Astor Place in the East Village. The bus is at the appropriately crazy crossroads of St. Marks Place, Eighth St., Third Ave., Fourth Ave. and The Bowery, (FYI, just a half a block away from the former site of America's first disco, The Psychedelic Circus on St. Mark's Place). The bus leaps out at you, it is a cacophony of color, design and visual rhythms.

Kat sells her one of a kind, hand made magic clothing from her bus. Her art clothing is as unique as it gets, no two are alike. She makes her clothes out of re-claimed pieces of old sweaters and fabric, magically making them into entirely new garments - gloves, sweaters, hoodies, skirts, pants - cleaned, of course. Young and old love the creativity. While I was there, some cool kids lit up while trying on gloves. 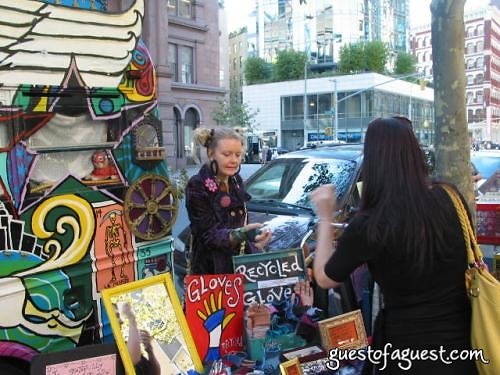 Got some clothes that you simply won't throw out for sentimental reasons, despite the holes? A woman showed up to pick up her special order - a hoodie made out of her deceased mother's old sweaters. She was so happy when she put it on, I became positively dewy eyed.

Kesey's bus got its name when one of the artists who was working on it painted the word "Further" on the bus's destination placard. Kat has gone further than most, including four years on the road following The Grateful Dead full time. And, she is like the line in "Magic Bus", by The Who: "Each time I go a different way." Which means, plane train, automobile, truck, bus, boat, foot and lots of hitchhiking."

In 2006 alone she, "Hitchiked to Timbuktu, crossed the Sahara, sailed the Niger River, rode with the Paris-Dakar Rally and received countless marriage proposals from men named Mohammed."

In South Ammerica she "...was repeatedly tear gassed, walked fifty km all night for Jesus, hitchhiked to Bogota to meet a rock icon. Got attacked by 20 dogs (cool scar). Salsa danced like crazy. Disrupted a soccer game because the goalie was checking me out and the other team scored".

In 2004 she, "...sailed down the Amazon, logged record-breaking hours in a hammock. Partied with the trannies at Carnavale. Was mugged by a band of kids with machetes in Copacabana. Was finally told, "I love you!", on Valentine's Day... by a parrot! Learned not to wear mini-skirts in a mosh pit."

Kat has found a second home in Banos, Ecuador, a village which sits on an active volcano in the Andes. Because of its location and because, "Everyone in the village has had a Virgin Mary sighting.", it has been a tourist and pilgrimage destination for centuries. Pardon the triteness, but don't miss the bus, Kat is on Astor Place only until Christmas, Fri, Sat., & Sun., noon till six. See her website, too.

Usually, the most difficult lines to write in a piece are the first and last. I will happily let Kat do the last,

"My life has not been ordinary and I guess I am pretty grateful for that. I have been waltzing around, the planet for years. Sometimes it takes a lot of work to remember that a life lived in the pursuit of joy is just as valid (or more!) than a life lived in the pursuit of money. My life has been gorgeous, and I am proud of what I have lived, even if it looks a little weird on a resume. I am most proud of - adventures, joys, tragedies endured, and little moments that just made me feel alive."