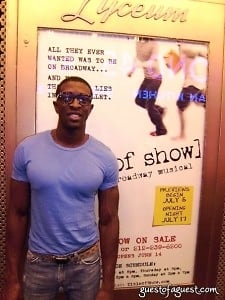 We have a little secret that not even most of our good friends know about, not because we're embarrassed, just because most would not care. We love Broadway shows and see basically every major production that comes out. In fact, we saw every major tony award nominated show this past year. We know, "two gay guys that like Broadway! Stop the Presses!" We are sure you were expecting something more salacious. In truth, Scott is obsessed, and like all good partners that could really care less about their other's obsession, Naeem puts up with it.

Last night we went and saw a preview of the new musical called simply [title of show]. Explaining the show is a bit confusing because it is basically about the making of the show that you're watching.

The story centers on two gays and their girls. All are struggling actors, who dream of making a musical that makes it to broadway. [title of show] chronicles the joys, the trials and the tribulations that ensue. The stage consists of 4 chairs, the cast and a pianist. If this show becomes a broadway hit you can bet Broadway folk are going to think twice before plunking millions on sets and costumes without focusing on the story. [title of show] originally played at the New York Musical Theatre Festival, then played off broadway, where it won 3 Obie awards. In a dramatic twist, all played out in front of you, the show made it to Broadway and opens next week at the Lyceum theater.

We have been waiting to write these three words all of our lives, so here goes. Run, don't walk to get your tickets to see [title of show]. You will laugh, you may cry and you will be quoting from the show for days. We can't stop saying, "hot box of crazy", "hangry", and "procrastibating". And if you want to know what those mean, you're going to have to go see the show for yourself to find out.