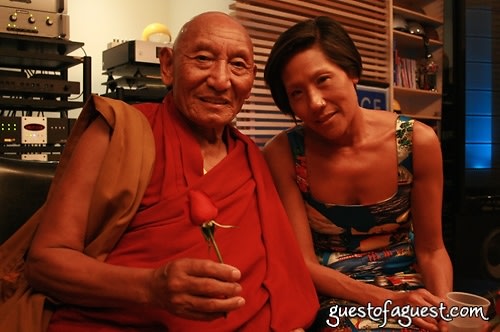 ...said Palden Gyatso, as he was trying to explain to us the secret to his inner strength. What he was trying to say was that, contrary to his surroundings, he never thought that he was "losing" this game called life, and so carried on living even through oppression and hardship that most of us will never be able to picturalize. I hung onto his words (translated to us) like they would hold the portal to the secrets of life. And don't you know, it turns out that they do....

I could probably go on all day reciting quotes I've heard throughout my life...coming from all kinds of sources: parents, coaches, priests, nuns, teachers, books, television,"The Secret". It's a simple truth: that thoughts can control your destiny. And, admittedly it is a bit anagogical. But when you see it actualized as vividly as in the life of Palden Gyatso, all of these simplistic phrases start to click.

I had no idea what to expect last night as I arrived to the beautiful apartment in Cooper's Sq. "Fire Under the Snow" was the documentary I was going to celebrate, about some Tibetan monk who's spirit was unbroken after 33 years of torture. Lelaine Lau, of 403 (a cultural salon seeking to encourage discussion and the exchange of ideas through presentations on the arts, culture, and humanitarian concerns) orchestrated the evening, to showcase this amazing film which was produced and directed by Makoto Sasa with executive producer Maura Moynihan.

As it turned out, Palden wasn't just "some monk"...

What I like most about Palden is that he is adorably stubborn. And not just with his hunger strikes (he went 15 days at the Torino Olympics in '06 in protest to the Bejing games), but with his quest for truth. He is stubborn at all costs, and believe me, it has cost him.

By stubbornly defending his country time and time again by refusing to recognize that it (Tibet) was a part of China, by refusing to denounce his leader (the Dali Lama), and by refusing to terminate his peaceful demonstrations about the atrocities of the Chinese labor camps; Palden spent a total of 33 years in Chinese prison camps. He was starved and tortured. His nation and culture were destroyed, his teachers, friends and family displaced, jailed or killed.

His fake teeth hide the scar tissue from the electric rod he once had stuck in his mouth, and the scars from his years of beating and hangings and kneelings on glass shards are there as daily reminders of his life's mission: to lead the world to the truth about his country. His frail body becoming our poster board for action.

And still he remains peaceful, spiritual, and full of forgiveness....stubbornly so.

Being close to Palden Gyatso is strangely comforting; the same feeling I felt when I was in close proximity to Somaly Mam, to anyone that has experienced that kind of unfamiliar and grotesque suffering. They are peaceful and stoic, and full of forgiveness. Just one percentage of their powerful forgiveness holds enough fire to burn through layers and layers of snow....and Palden's unbroken spirit after 33 years of torture, burns brighter each day, setting small fires in each person he encounters along the way.

Fire Under The Snow was shown at the Tribeca film festival and will be released for a short time in NY and LA to coincide with the Bejing Olympics.

Tens of thousands of Tibetans have been arrested and sent to labor camps in the last 3 months alone, in direct revocation of a pledge to the International Olympic Committee to observe international standards of human rights. And in the Chinese government's ongoing struggle to suppress evidence of its brutal occupation, it is strictly limiting press and tourist freedom of movement during the Games.

Please go to their website to find out ways you can help the cause. Palden himself was freed from prison because of letters from people like you.

"Truth will ultimately prevail where there are pains taken to bring it to light." -George Washington