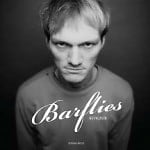 What exactly are Barflies? They are regulars of a bar named Kaffibarinn Frikki & Dýrið in Reykjavík, Iceland. They are defined as “Bartenders, musicians, actors, actresses, writers, models, entrepreneurs, photographers, computer geeks, students, filmmakers, artists, and some just plain old barflies with nothing much to report.” To the talented Snorri Brothers, they are works of art. Last night Einar Snorri Einarsson and Eiður Snorri Eysteinsson brought Reykjavík, Iceland to DUMBO.

The opening reception for the Snorri Brothers’ book, Barflies Reykjavík, was held at PowerHouse Arena in DUMBO. The book consists of portraits of these “Barflies” shot within a short time period with a dirty, old Hasselblad camera. (To add character of course!) Back in 1993, Kaffibarinn Frikki & Dýrið opened and became the main hang-out for Iceland’s Gen-X. There was live streaming video of Reykjavík, Iceland on display so we could see barflies in their natural surroundings! We even saw Alek Wek, a friend of the Snorri Brothers, at the reception.

Maybe the Snorri Brothers can do a book on some New York Barflies that we know!