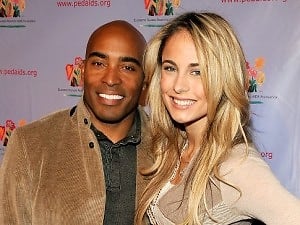 The Elizabeth Glaser Pediatric AIDS Foundation held its 17th Annual "Kids For Kids" Carnival at Skylight Studios this Saturday bringing out a ton of celebs with their kids in tow as well as Tiki Barber and his, um, little one.

Elizabeth Glaser's story is a tragic one. Married to Paul Glaser (better known as Hutch from Starsky and Hutch), she contracted HIV in the early '80's during a blood transfusion while giving birth to her daughter. She unknowingly passed on the disease to both the baby, Ariel, and her second child Jake.

Elizabeth and Ariel passed away from the disease but Jake is still alive and well and doing what he can to raise money for pediatric HIV/AIDS research. He took the stage with HIV positive Kami, a puppet from Takalani Sesame, the South African version of Sesame Street, to talk to kids and their families about what it's like to live with the disease, bringing many in the crowd to tears. 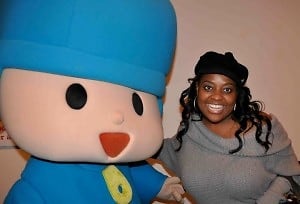 But it was more celebration than sadness.  Mariska Hargitay and Sherri Shepard both brought their sons out for a fun day of activities that included readings by Rafiki, the monkey from The Lion King, African dance workshops led by the Alvin Ailey Arts and Education Teaching Artists and a station for sock puppet making.

Tiki Barber spent most of the time at 77kids by American Eagle station decorating jeans with his 23 year old girlfriend Traci Lynn Johnson. The application of feather, glitter, and puffy paint as they sat in miniature, child-sized chairs didn't do much to cast the spotlight off of their age discrepancy. While they shied away from talking about kids or anything personal for "legal reasons," NY Daily News reports they are working on another charity project together, which means Tiki is really planning on sticking with this relationship. Too soon to go public? Yes.

Tinsley Mortimer and her boyfriend were also at the event taking pictures with fans (Yes, really. High Society apparently had some viewers). Adrienne Bailon and Boardwalk Empire star Vincent Piazza were also on hand to say hi to the kids and enjoy a stroll down "Restaurant Row" which featured a number of goods from  restaurants like Otto Enoteca Pizzeria by Mario Batali, ‘wichcraft by Tom Colicchio, Billy’s Bakery, and Serendipity giving out free samples of their signature dishes.

This year’s event has raised $1.2 million, bringing the event’s lifetime total to more than $25 million.