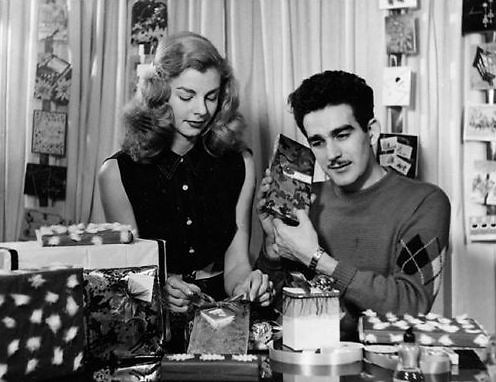 Today's "It'a a vintage Christmas" photo was taken in 1952 and comes with a long caption written by the woman in the photo herself....click below to read:

"Christmas of 1952. Jerry and I were spending our final days in the apartment over the unclaimed freight store. After 5 1/2 years of marriage, and a little money in the bank, we wanted to begin a family. One of the two apartments on the second floor of the large brick residence where my employer practiced medicine had become available; we would renovate it and move in.

The object was to make it as easy as possible for me to continue working after a hoped-for birth. We even spoke to the other upstairs occupant, a young mother who had gone through nurse's training. Perfect! I would hand over baby in the back hallway every morning, then slide down the curving front bannister to the doctor's office! We would miss our spacious two-bedroom, rent-controlled apartment with extra features like a screened-and-glassed porch at the rear where we slept in summers. There were three dining room windows behind us in this photo.

Since the scene outside was of another building only feet away, we bought yards of muslin, then sewed and gathered it on a long rod, which Jerry installed. We could relieve all of the white with color according to the season; here, our Christmas cards hung on wide satin streamers, to display and to decorate. Similar to our winter departure from the apartment, is Jerry's final departure from life, this December 11, 2005."