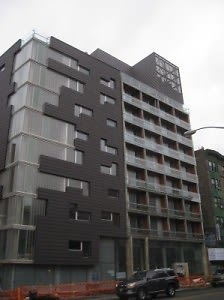 Swell hotel The Nolitan opens at 30 Kenmare Street in November. Its 55 rooms, which start at around $300, are booked through early December. Out of towners are set to invade last month's coolest street in the city. There goes the neighborhood?  -

A new Starbucks used to confirm an "emerging" area's gentrified respectability. In the last decade, the arrival of a sleek hotel has come to signal the mainstreaming of hip, until recently scruffy, neighborhoods. Hotels, for obvious reasons, mean the cat's out of the bag and that quirky, undiscovered 'hoods  are no longer the provenance of in-the-know locals, but heat-seeking tourists clutching Wallpaper guides (and where Wallpaper goes, Fodors quickly follows).

It happened in the Meatpacking District (The Gansevoort, the Maritime), Lower East Side (The Hotel on Rivington) and, soon, Williamsburg (The Hotel Williamsburg). Kenmare Street isn't a neighborhood unto itself. It's in Little Italy, Chinatown or Nolita depending on how long you've lived in NYC and your tolerance for cutesy acronyms coined by realtors. But it has popped up on the tourist radar with lightning speed, just a few months after it was crowned Manhattan's latest, chicest restaurant row thanks to newborns Kenmare, Travertine and J&S Food Hall (which will be in the Nolitan's lobby) joining toddlers like La Esquina.

"The Nolitan Hotel is the first luxury boutique hotel in Manhattan to open in this authentic New York neighborhood."

Will The Nolitan's "indulgent rain showers" and "300-count sateen bedding" deter guests from exploring "one of the last quintessential places offering a real New York experience?"  Or does its arrival peel away whatever authenticity was left?