Calvin Klein and the fashion elite feted a milestone for the designer's new boyfriend,  Harlem Children's Zone held a dinner, Amanda Lepore and some festively dressed ladies hit a housewarming and princesses glided on ice. Take a look at the details:

Where: The Four Seasons Restaurant

Other Details: Harlem Children's Center held an event at the Four Season where like-minded patrons came together to help raise funds and awareness. John Legend was in attendance and sat down at his piano to entertain guests. 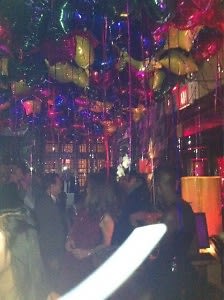 Other Details: Drag Queens and women in little bikinis and Carnival feathered head wear came out to fete Ryan Serhant's new digs.  He used to live in the Financial District. No word on what neighborhood he is now calling home. 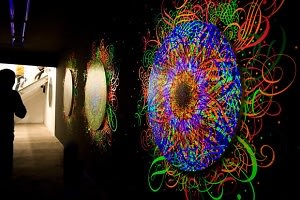 Who Was There: Gina Kim, Ryan McGinness, Keppie

Other Details: Twenty-four selected works from McGinness' Black Holes series will be on display for this selling exhibition. The contemporary works created between 2004-2010 feature predominantly spherical psychedelic images of various colors.The artist wore day-glo to match the work. [Via]

Other Details: Disney's favorite characters hit the ice at Madison Square Garden to double axel, triple salchow and wow parents and toddlers alike. All the Princesses were present from Snow White to Cinderella To Jasmine to even Ariel.  [Via]