Both Digital Broadcasting Group and Victoria Schweizer celebrated big over New York's great waters. Slip on Style hosted a swanky shopping event at Catherine Malandrino, Artlog kicked off it's 57th Street Art Crawl. It looks like the rain didn't stop people from having a good time! 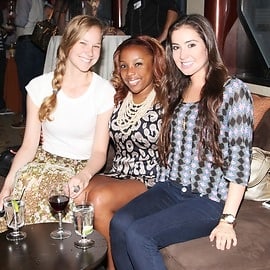 Where: Over the Atlantic Ocean

Other Details: Digital Broadcasting Group played it chic while hosting a grand party over the Atlantic.

Other Details: The birthday extravaganza for Girls Behaving Badly's Victoria Schweizer's took the city's seas by storm aboard "The Jewel." Guest came out in their best nautical and captain inspired duds to bare the rain and thunder to party over the high seas. View photos from the event HERE.

The Girls Inc. of New York City Junior Board Hosts Raise a Glass for Girls

Other Details: The Girls Inc. of New York City Junior Board hosted a special wine tasting all for benefiting Girls Inc. The event featured a selection of popular French hors d'oeuvres and desserts, with the sommelier that lead guests in a tasting of eight wines.

Slip on Style at Catherine Malandrino

Who Was There: Jessica Stoller & Catherine Malandrino

Other Details: The event was an exclusive shopping event for Slip on Style, hosted by Jessica Stoller featured the collections of Catherine Malandrino and Malandrino. Guests enjoyed cocktails and cupcakes while they shopped in comfort and style.