Gwyneth Paltrow supported Bent on Learning; SELF Magazine turned 10 years old with a big bash that was attended by Zooey Deschanel and her hubby; Solange Knowles went shopping, Leonardo Dicaprio and almost everyone else in New York City hit the opening for the Dream Downtown and more! Last night's parties had their head in the clouds!

Where: The Urban Zen Center at Steven Weiss Studio

Other Details: Bent On Yoga is a charity dedicated to improving the 'physical fitness and cognitive, social and emotional skills' of children in New York public schools. Of course Gwyneth Paltrow is on board! She told In Style: "'I'm very strict with myself. When I practice six days a week and eat clean food, I feel much better.' [Via] 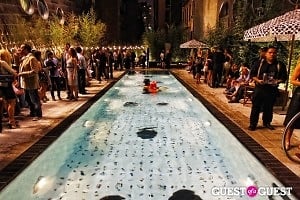 Other Details: Vikram Chatwal's latest venture, the Dream Downtown, opened it's doors last night. The three levels were packed with a smattering of celebs like Leonardo Dicaprio, Justin Bartha, and Amar'e Stoudemire;  nightlife types like Richie Rich, Mia Moretti, and Wass Stevens; and your run of the mill scenesters who partook in the open bar, mingled amongst performers dressed in a variety of costumes, and checked out the PH-D Rooftop Lounge, Marble Lane restaurant, and The Beach. get more details on the opening HERE and be sure to take a look at pictures HERE! 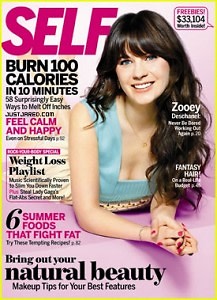 Other Details: SELF Magazine celebrated its 10th birthday and honored Editor-in-Chief Lucy Danziger with a party at Gansevoort Park Avenue.  July is the mag's music issue, bringing out the likes of Death Cab for Cutie's Ben Gibbard and his wife, this month's cover gal Zooey Deschanel. Cobra Starships' Gabe Saporta played DJ and was joined by his girlfriend Erin Fetherston.

Other Details: Guests came out to Caroline's to watch Season 2 of Louis CK with the man and cast themselves. 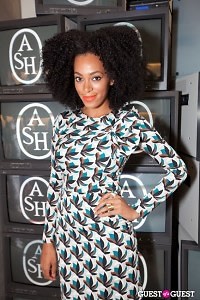 Other Details: Inspired by a 1920s gymnasium, the store's design features modern architectural elements adding to the flavor of edgy shoes in display. The launch event was hosted by fashion site Refinery29 and brought out some of fashion's coolest personalities. Guests included Solange Knowles, Becka Diamond, Hannah Bronfman, Adrienne Bailon and plenty more!   Be sure to take a look at pics HERE! 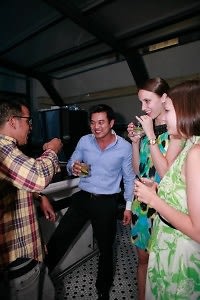 Other Details: Martini Media Network celebrated their groundbreaking Influencer Research Study and Conference with various publishers, advertisers, industry insiders and friends on the rooftop of the Hotel Chantelle. The soiree, which featured internationally renowned DJ Tim Sweeney, was hosted by CRO, Adam Chandler and Director of Business Development, Alex Magnin.   Be sure to take a look at pics HERE!