Aaaaaand, it's benefit season! As integral a part of New York Fall as turning leaves and pumpkin spice lattes, New Yorkers are dusting off their ballgowns for a slew of parties with philanthropic intents. Last night? New Yorkers For Children, and Kanye was there! Will we be seeing him a lot, this season? 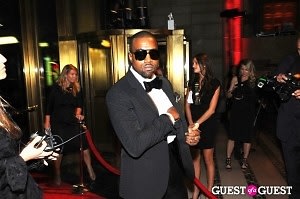 Who Was There: Jason Binn, Mick Rock, Michael Satsky,

Other Details: The event was hosted by Gotham Magazine. The Plunge has been quietly open for a while now, and been the host venue for a variety of Fashion Week events, but last night was the official opening.

Who was there: Renee Fleming, Chris Meloni, Daniel Bloud, Tamara Mellon, Fabiola Beracasa, and Lauren Remington Platt, who showed up in a full ball gown (on her way to NYFC)

Other Details: The jewelry collection is absolutely beautiful, but we'd probably buy it anyway as 100% of the proceeds go to the Metropolitan Opera. (The designer, Ann Ziff, is co-Chairwoman of the company.)

Season Premiere Of Bored To Death

Other Details: After party was at Capitale

Nowhere Boy Premiere and After Party

Other Details: Quarrymen, John Lennon's first band, played live at the afterparty. Yoko Ono herself presented the film, which is a fictionalized account of John Lennon's childhood.

Who Was There: Richard Lambertson and John Truex, designers of the new Tiffany Leather Collection (also, randomly, lots of cute guys?)

Other Details: There was a line at the door; surprising, for a Tiffany cocktail event.