Hipsters took a bus ride deep into South Brooklyn to hear live music and slip-n-slide; Penn Badgley and Dianna Agron tried on shades at the Mondrian Soho; Ted Leo rocked the Seaport for 4Knots; and Fool's Gold went swimming with the sharks! This weekend's parties laughed in the face of aquatic danger! 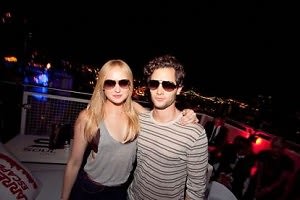 Other Details: Penn Badgley spent Saturday in the VIP section where he was overheard talking about moving into a Lower East Side bachelor pad. Glee's Dianna picked up classic Carrera sunglasses, Venroy Australia board shorts and SOUL by Ludacris headphones. Other guests milled about sipping UV Vodka and MiO Berry Pomegranate, while Christian Siriano rocked it out to Britney Spears' "Hold It Against Me."[PhotoCredit: NickyDigital] 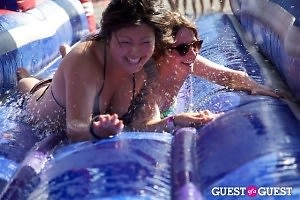 Who Was There: Penguin Prison, Wild Yaks, Janka Nabay and The Bubu Gang, and Monogold

Other Details: When Jelly first announced they'd be back this year with the help of Topman at the Aviator Sports Complex it was a bittersweet moment. We were excited at the thought of another year of emerging bands, booze, and hipster dodgeball, but had doubts about the hard to reach, have to get there by bus, decidedly not near Bedford Avenue south Brooklyn location. How did the first concert go? get the details HERE and be sure to check out more pics HERE!

Who Was There: Ted Leo, The Pharmacists, The Screaming Females

Other Details: The Screaming Females took the stage to warm up the crowd for Ted Leo at the official "warm up" to next weekend's 4 Knots Festival. Lead singer Marissa Paternoster wowed the crowd with her guiatr skills, but left people wondering how young she was with small voiced stage banter like "Come get a record, if um...you can find the tent." Ted Leo and his band celebrated their 5th time at the Seaport and the 10th anniversary of both playing free shows in the city and the anniversary of his album The Tyranny of Distance, which was played in full along with crowd favorites mixed in.

Swimming With The Sharks